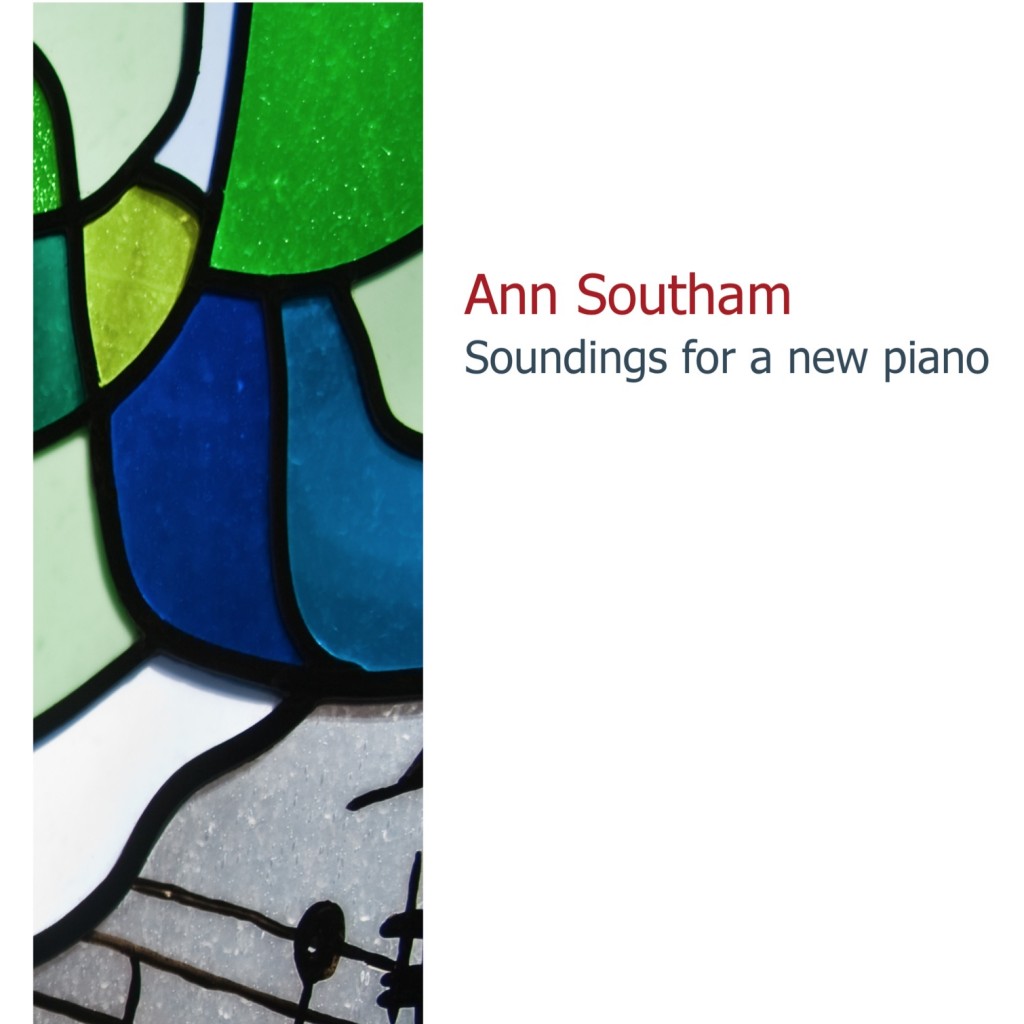 Southam (1937-2010) was an interesting Canadian composer who wrote long intricate pieces for piano, as well as electronic music and pieces requiring improvisation. She cites Terry Riley’s A Rainbow in Curved Air and Steve Reich as initial minimalist influences, and some of the longer and more complex minimalist pieces remind me of early John Adams like Phrygian Gates or China Gates. Her Glass Houses, for example, is a long, sometimes difficult piece with an economical notation that makes it easy to read: 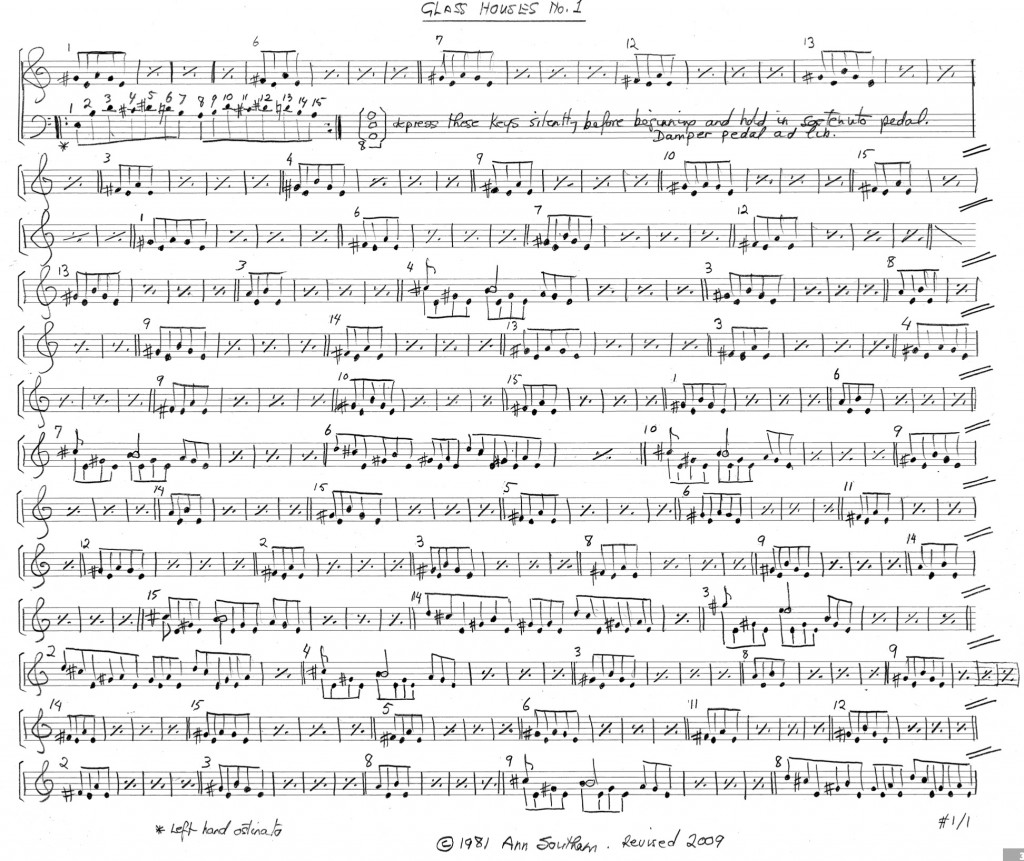 But Southam began as a twelve-tone composer, and what interests me about her piano music is the work that attempts to mix twelve-tone technique with minimalist repetition.

In an interview she describes her piece Rivers this way:

It’s a minimalist piece, a process piece… The repeating pattern in the right hand really is just two notes, back and forth, alternating, and around it is being woven a 12-tone row. It’s the same 12-tone row I’ve been using for the past 20 years. I’ve got this piece of paper which I keep getting out with this old row on it which I keep trying to rework, put to some use, beat some sort of tonal sense into it! So the process is to spin out the row one note at a time, adding a new note until the whole row is present. The two notes in the repeating right hand figure give a kind of tonal center around which the 12-tone row works. I like the intervals that are set up between the note of the row and the tonal center… Sometimes they suggest sort of a diatonic context, and you expect that’s its going to go in a certain direction — and it doesn’t. It all falls apart and goes off somewhere else. And this can be frustrating and you work to rationalize this.

Soundings for a New Piano is subtitled “Twelve Meditations on a Twelve-Tone Row,” and I suppose it might even be the same row she mentions in this interview. When I first listened to Soundings for a New Piano I wasn’t aware of the presence of the row (the subtitle isn’t printed on the title page). From a player’s or listener’s point of view, the piece induces an awareness of a slow journey through different tone points, which I assume is the effect of Southam working through the tone row with repeated notes interpolated.

Here is the opening of the piece: 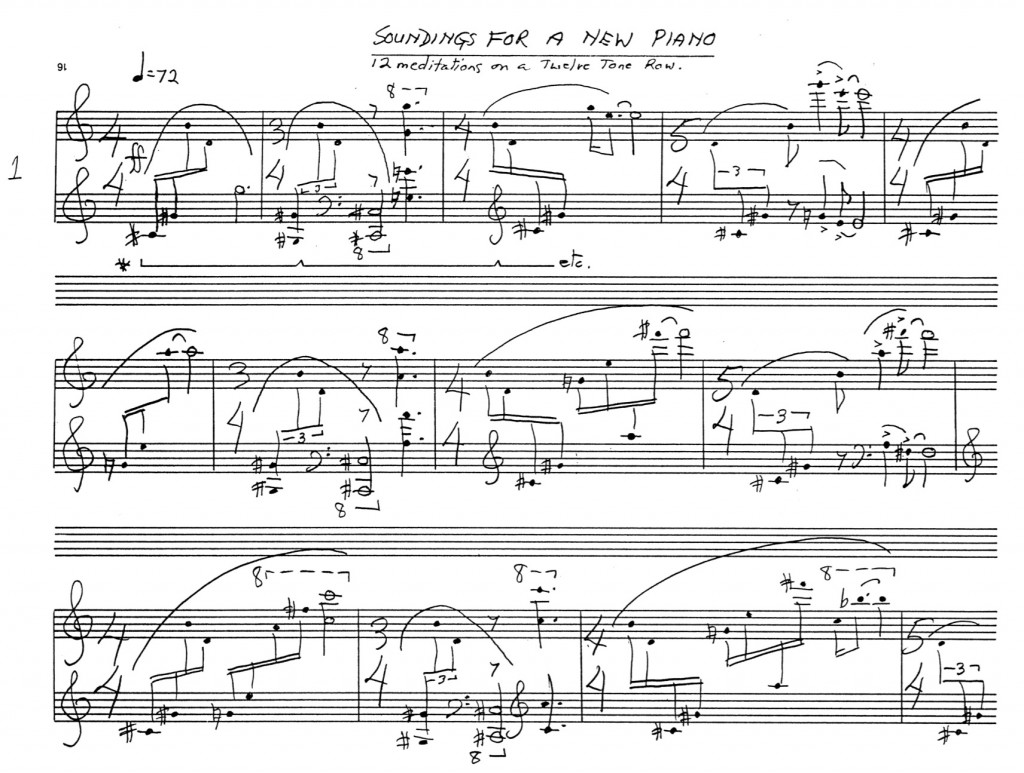 In the opening measures the notes c#, g#, b, and d repeat several times in different orders, with other notes added:

I’m sure a listener with more interest in puzzles than I have can figure out the full system, if there is one. From a listener’s point of view, there is a slowly building complexity in these measures (that’s the contribution of the 12-tone row), but it is balanced against the repeated rhythm. And it’s a compelling rhythm, in paired measures with slight metrical differences. The rhythm changes in each of the twelve “meditations.” Here is the opening of Meditation no. 2: 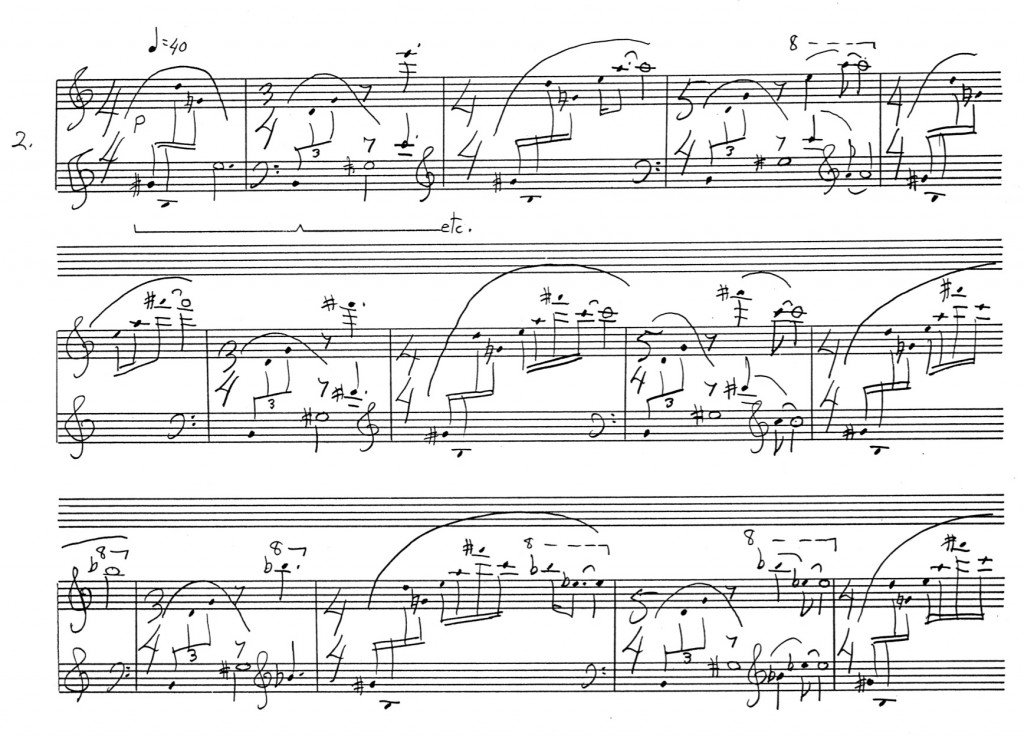 The brief “Interlude” (here reproduced in its entirety) serves to introduce a double-dotted rhythm, which is then available to the concluding five pieces:

And Soundings concludes with a kind of reprise of Meditation no. 1: 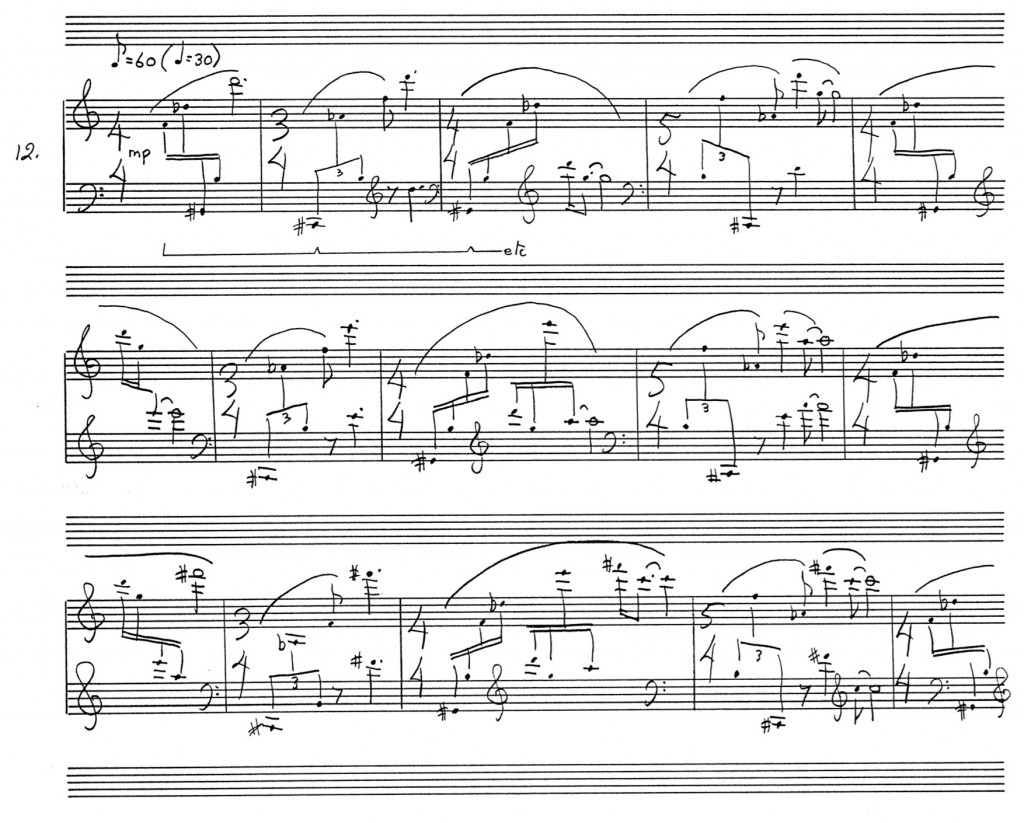 There are several sources of minimalist iteration: the characteristic rhythms of each of the twelve meditations; the slight changes of meter within each piece; and the “drone notes” and their changing presence within each measure. They play against my imprecise awareness of the evolving chromaticism required by the 12-tone row, producing a much richer experience than in some purely minimalist or purely serial music.

Soundings is easy to play, even in the manuscript version, except for one faster meditation. Much of it can be sight-read.

(This is an incomplete analysis, I recognize, and it should be augmented by a more accurate description of her 12-tone row and the principles of each of the twelve meditations. Perhaps someone can help out here. At the moment my concern is more what is available to the ear rather than the eye.)