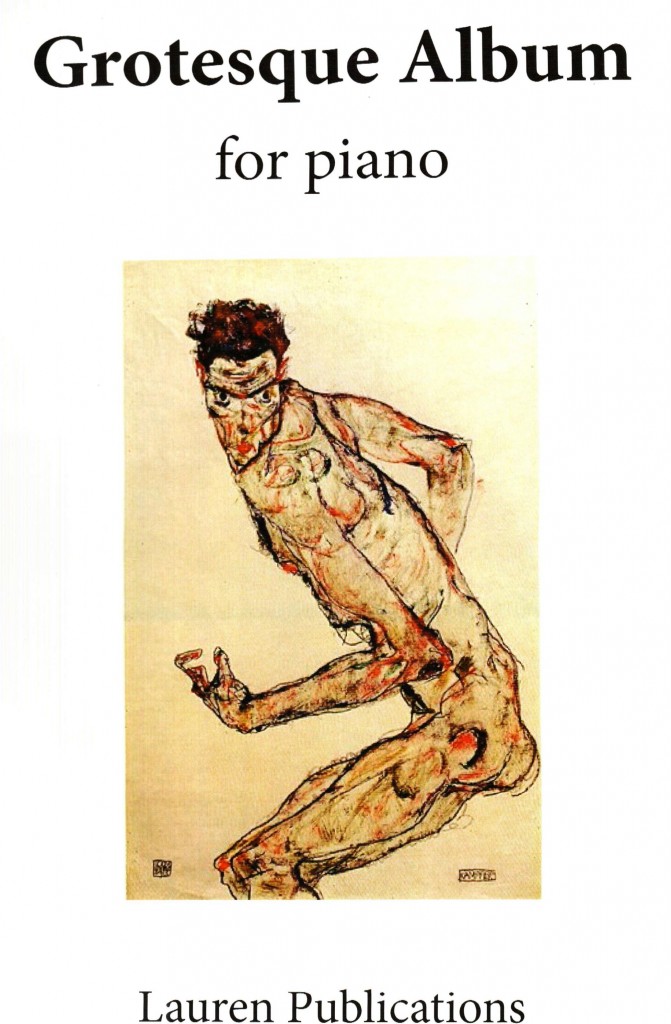 There isn’t much about this very interesting collection that isn’t extremely obscure. I bought the English-language reprint, Grotesque Album for Piano, in the Juilliard Store in New York. The publisher, Lauren, reprint “editions of rare and out-of-print music” and are distributed by C.F. Peters. No editor is named. The original edition (Universal, 1922) seems also to have had a limited print run. Almost all the composers represented are obscure.

The editor, Carl Seelig (1894-1962) was a friend of Robert Walser’s and Einstein’s, and author of nearly 300 publications, according to the German- and English-language Wikipedia entries. This seems to be one of his few attempts at music criticism. His remarks, signed “Vienna, summer 1921,” open with the striking assertion that “the development of modern art quite clearly manifests the fact that every revolutionary moment unfailingly leads to experiments of a grotesque nature” (“Die Entwicklung der modernen Kunst zeigt mit scharfer Deutlichkeit, dass jede revolutionäre Bewegung zu grotesken Versuchen führt”).

When Seelig says “every revolutionary moment” gives rise to a period of grotesque “experiments,” he may be thinking of mannerism, which was first studied in Vienna in the years he was writing; but he is certainly thinking of contemporary writing (especially, perhaps, Walser’s), painting (especially Viennese expressionism), and cultural criticism (perhaps especially Karl Kraus). Still, it is difficult to know exactly what historical sequences Seelig has in mind because he traces “attempts” at the grotesque all the way back to Alessandro Poglietti, a composer who died in 1683 in Vienna, and who composed “oddities” and pieces with a “shrilly discordant effect.” Reading a draft of this text, the art historian Mark Haxthausen suggested Seelig was influenced by a popular book by Wilhelm Michel, Das Teuflische und Groteske in der Kunst, first published in 1911; he notes it was in its 25th printing by 1919. “Grotesque” in criticism of expressionism, he says, wasn’t common; it would be interesting to know more about Seelig’s, Michel’s, and other critics’ use of the term, which was first used in the Renaissance to characterize Roman wall painting.

Seelig says that after tonality has been “neglected if not completely dropped” (“bereits zurückgedrängt oder gar überwunden,” which could also be rendered “suppressed if not entirely overcome”), composers are “no longer satisfied by the merely beautiful in music.” Seelig presents a succinct theory of the “grotesque effect”: he says it is “generally… attained by means of strong lights somewhat violently applied to characteristic lines, exaggerated by startling contrasts and thereby bringing about a distortion of the innate artistic harmony” (“das künstlerische Ebenmass launig verzerren”).

These ideas of violence, strong contrasts, and distortion would be good starting points for an analysis of the style, which has been noted in German works of the period between the wars. Bartók and Stravinsky are Seelig’s examples; I would prefer to point to Shostakovich’s early works like the Preludes, op. 34. Other traits are a dependence on folk motifs for their unusual rhythms and harmonies; a penchant for dissonant versions of fin-de-siècle forms like waltzes (that would also be an example of “distortion”); and an interest, or weakness, for program music and intentionally overly vivid themes. The “violence” and “strong contrasts” Seelig mentions take various forms: quick alternations of tempi; equally quick alternations of pitches from the far ends of the keyboard; very fast changes from ff to pp, and from staccato marches to legato espressivo passages. Key changes are abrupt and distant, rather than continuously wandering as in late Reger. The music often seems enervated, nervous, restive, anxious, unsure, and emotionally unstable—nostalgic and then savage, deeply melancholic and then implausibly bright.

The reprint has a reproduction of a Schiele on the cover. It is interesting to speculate whether the original edition would have done the same, if it had been the custom then to put fine art on the covers of music publications (it wasn’t). Is the “grotesque” style the musical equivalent of Austrian expressionism? To some degree, the movements fit, especially where the composers are audibly chafing against academic and popular styles, or where they turn ostentatiously to the “cruder” forms and structures of folk music. But I don’t see a visual analogue to the flighty changes of pace and mood that suddenly turn legato passages into staccato ones, or add filigrees of 64th notes to waltz themes, or leap into 15va passages. That kind of skittishness is technically accomplished and sometimes very delicate, and has little to do with the overall force and violence of early Schiele, for example. For me, the Grotesk style is only musical, and is different from visual expressionism.

Some notes on the individual pieces:

These are nos. 2 and 8 of Bartók’s Op. 20. Seelig’s choice is interesting, because other pieces in Op. 20 would seem to have as much, or more, “grotesqueness” about them. (Nos. 4 and 6, for example, are quite “grotesque,” with skittish ornaments and crossing melody lines.)

The first of the two is one of the less enervated or enervating pieces in the collection, with a steady rhythm and lyricism. Grosz’s later more popular style can be seen here, and also in his Tanzsuite (1922) which is in imslp.com. (Excerpt below.) 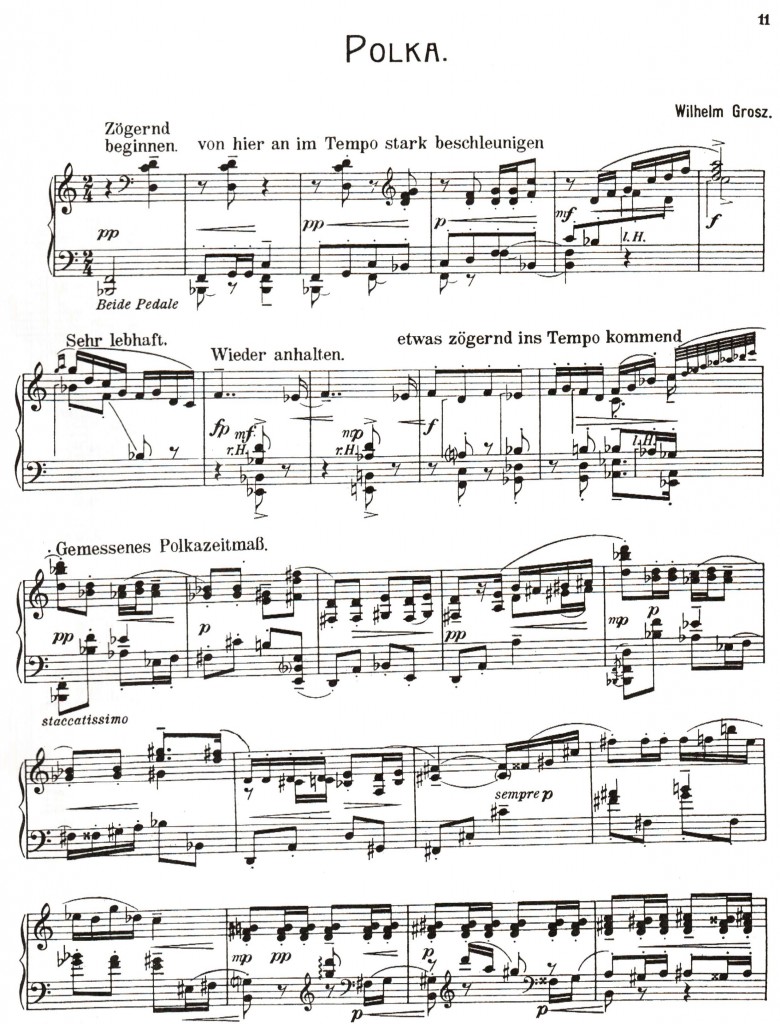 Hába became known as a composer of microtonal pieces, including a quarter-tone piano sonata and an opera. At the time Seelig collected his anthology, Hába had just finished studying at the Imperial Academy of Music and the Performing Arts in Vienna. The first of the two pieces here is an interesting bare melodic study, like a recitative, that intermittently breaks into march rhythms.

This album was compiled the same year Křenek completed Schubert’s Reliquie sonata, a year before Alma Mahler asked him to complete Mahler’s tenth symphony, and a year after he discovered atonality. It is therefore on the cusp between his late romantic early style, which prompted the two commissions, and his atonal style of the early 1920s. (Quickly supplanted by Stravinskian neoclassicism.)

YouTube has a performance of his third piano sonata, and there is also a recording of his piano music (“Felix Petyrek [1892-1951]: Klavierwerke,” played by Kolja Lessing, on the Abseits label), but Petyrek is mostly forgotten. The Official Reception is program music, with a whimsical appearance of a car, which disappears in the end of the piece (“Hier verschwindet das Auto um die Ecke”)—see jpegs below. 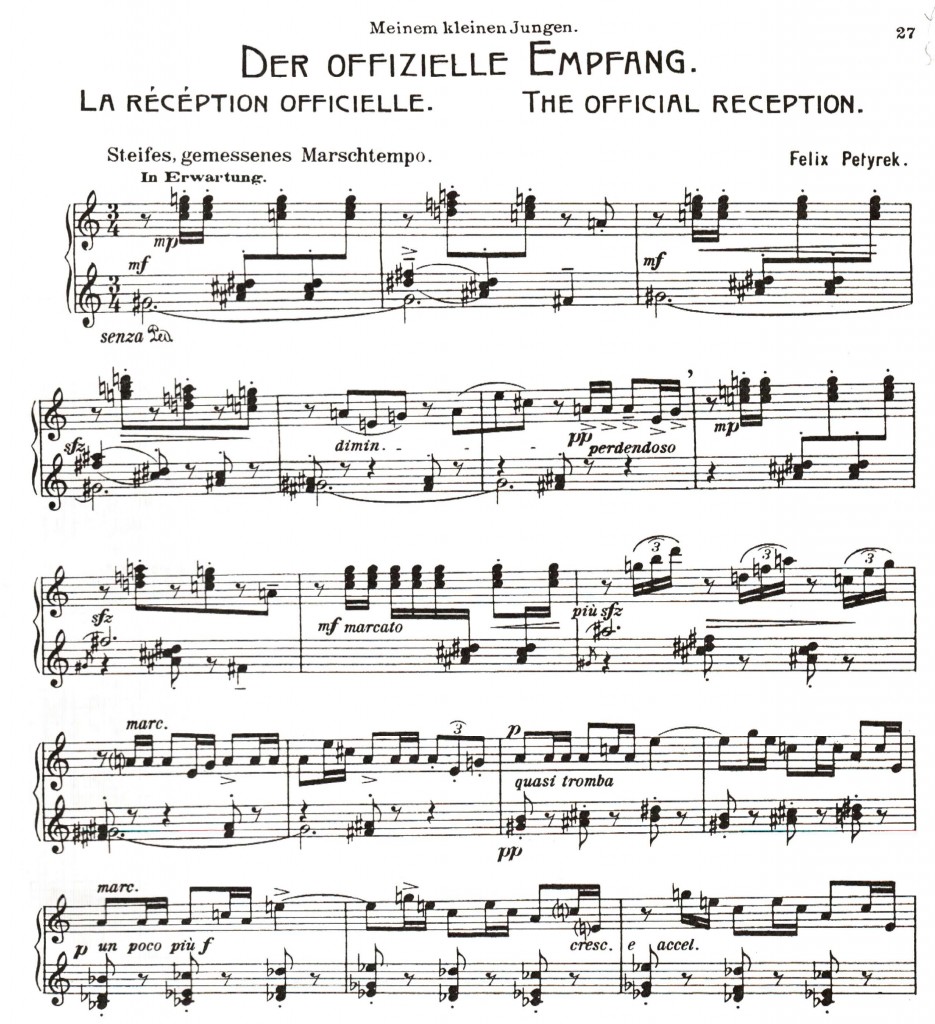 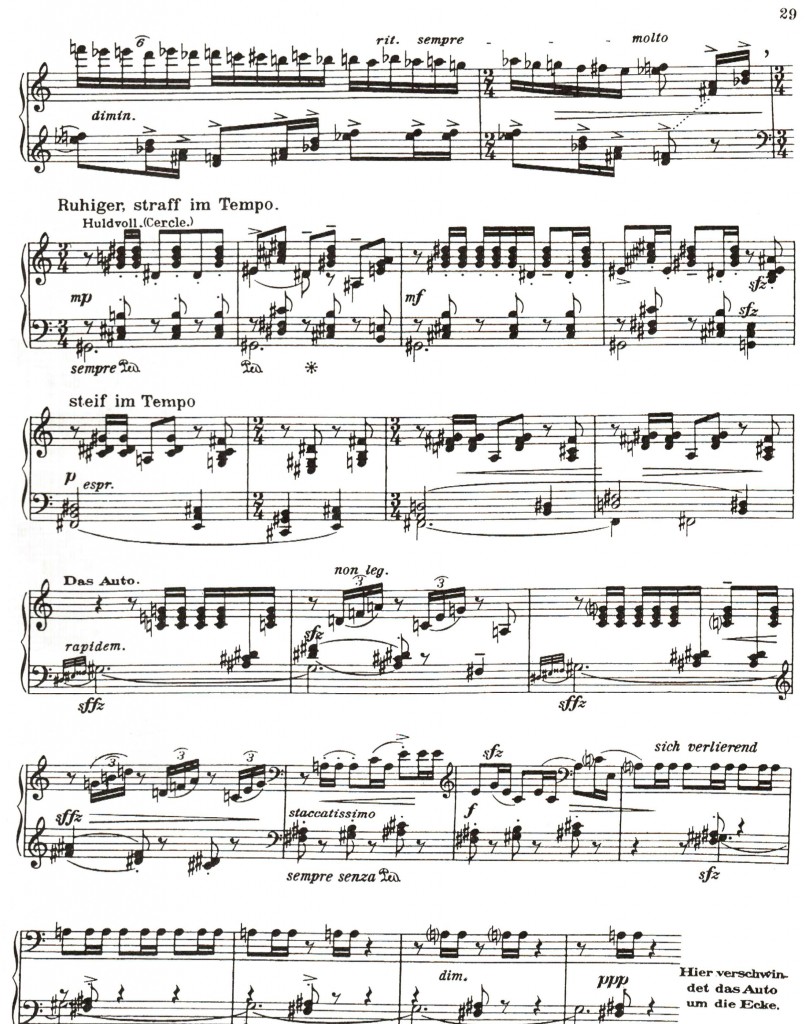 At the time Seelig assembled this collection, Rathaus was already in Berlin, so he is one of the few composers here who wouldn’t have been in Seelig’s circles in Vienna. Like several other composers in this collection, his work was later proscribed as “degenerate.” (He has recently been championed by the pianist Vladimir Stoupel.)

This is one of the most difficult pieces in the collection, precisely because it is one of the most “grotesque”: it is full of jumps between registers and quick notes (up to sixty-fourth notes in 11-note groups) that all keep to the 3/8 mock waltz time. It’s interesting to compare this with Réti’s theory of the unchanging “inner essence” and changing “outer appearance” of a musical composition, which is sketched on Wikipedia. (Two excerpts below.) 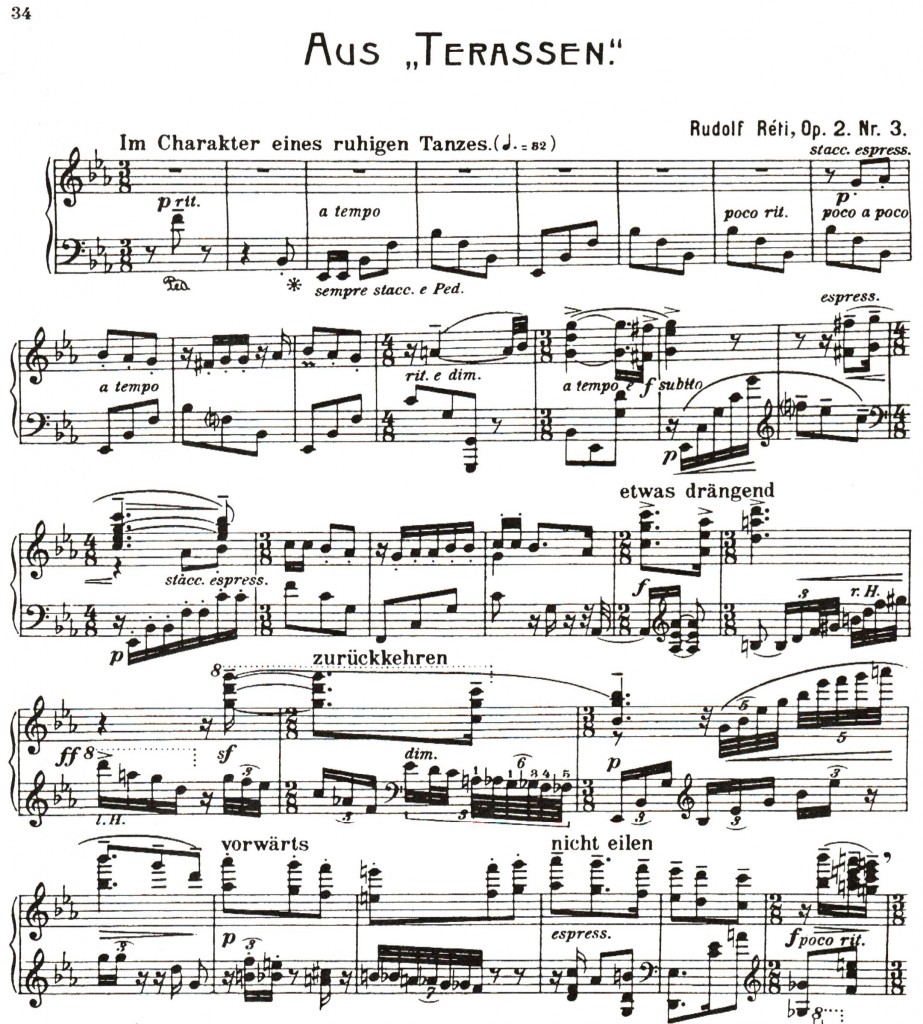 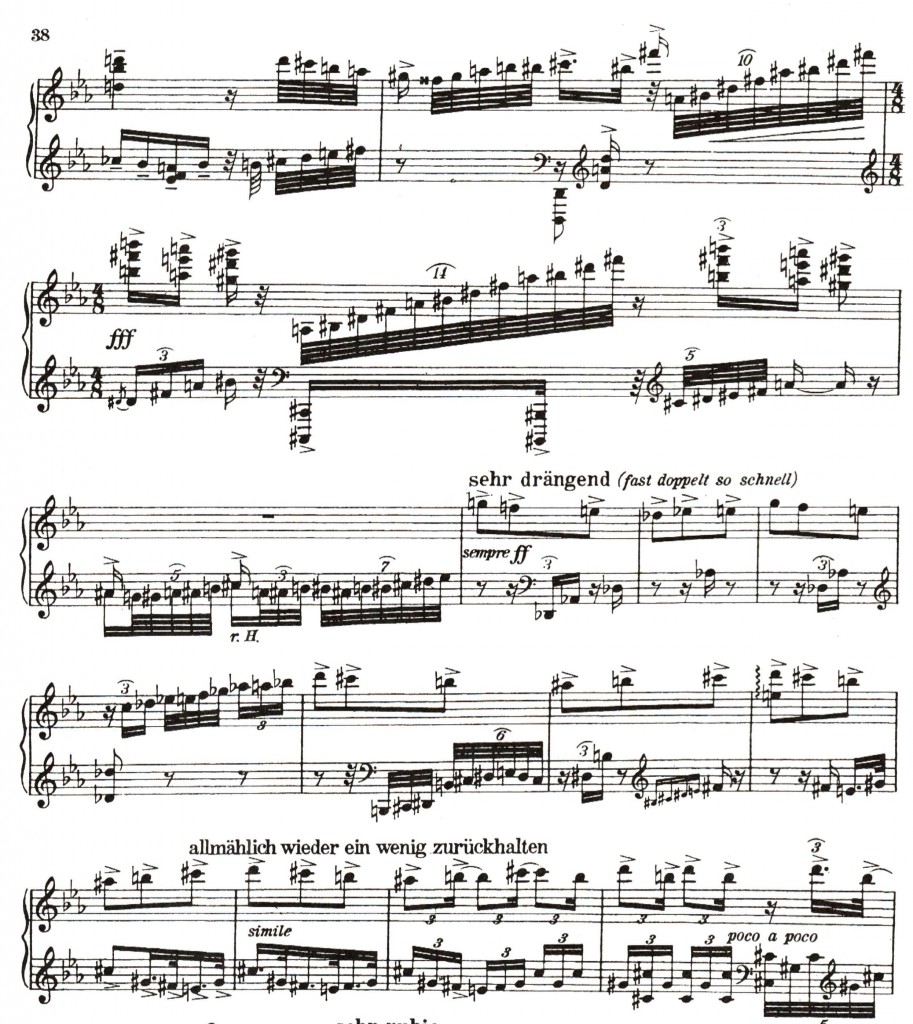 One of the best pieces in the collection. It alternates, in an indecisive fashion, between four passages, any one of which could have provided material for the whole three-page composition: am unharmonized line that degenerates and dies, a set of staccato chords, the beginning of a romantic-style melody à la Saint-Saëns, and a dissonant march in 2/4.  It doesn’t show traces of the fact that Wellesz was supposedly Schoenberg’s first private student, and it doesn’t especially echo Křenek, to whom Wellesz has been compared; its echoes are more the Bartók of the period around Op. 14. 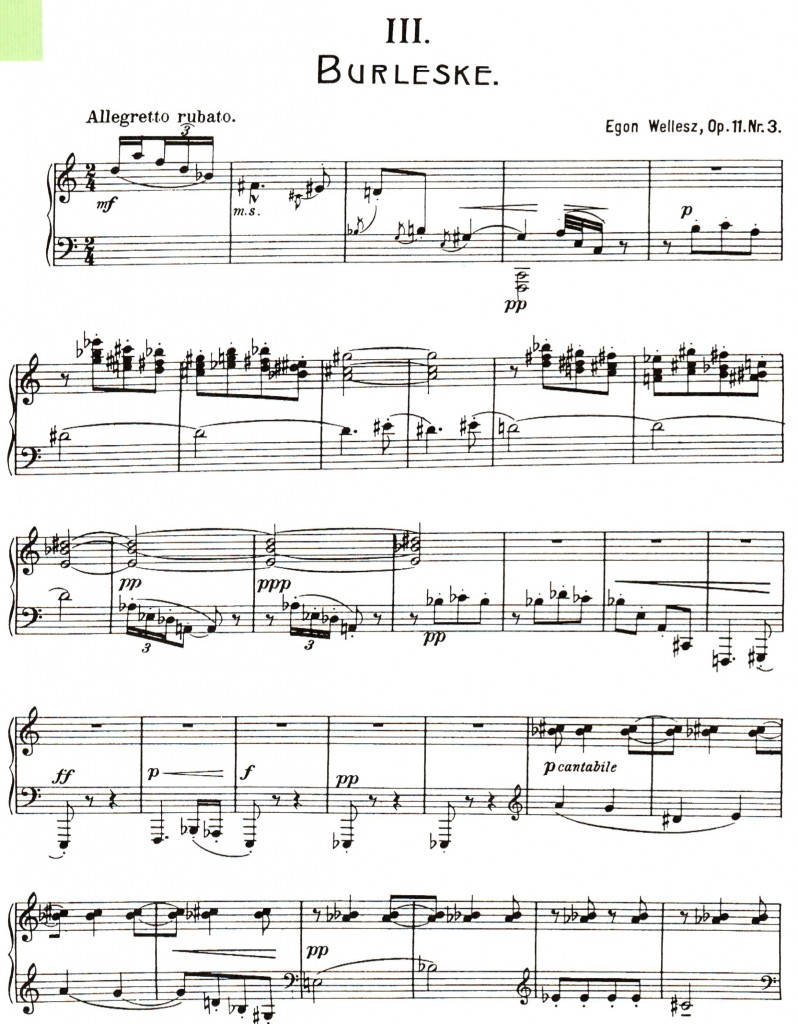