As the exemplar of the “New Complexity,” Ferneyhough has been one of the most discussed composers from the 1970s to the present. The critical literature is split (as the samples on Wikipedia show) between people who find the work challenging and admire its complexity, and those who find it inexpressive and unnecessarily intricate. (New complexity is often described as a kind of last-gasp modernism; I think that’s inaccurate, and I’ll say something about it at the end.)

I wonder if if might be possible to make some headway in this critical impasse. “Opus contra naturam” is a part of the opera “Shadowtime”; it’s for a solo pianist who also speaks a text. The obsessive detail (“complexity”) in Ferneyhough’s score calls for a close reading, which, oddly he seldom gets. Two observations, one on the spoken text and the other on the music:

1. The text: Ferneyhough wrote one of the poems spoken in “Opus contra naturam”; the other is by Charles Bernstein, who did the libretto. I think it is pertinent to judge the poem by standards of contemporary poetry, and to judge the opera’s subject, the death of Walter Benjamin, by standards of contemporary cultural criticism. From those perspectives, Ferneyhough’s work is at the same level as a beginning graduate student: his poem is precious and ostentatiously intellectual. (“What’s the cube root of a counterfactual? / An almond” — lines that obliquely but inaccurately refer to Mandelbrot.) Ferneyhough’s theme, Benjamin’s death, is a cliché in cultural studies. Ferneyhough says he hopes that “given [Benjamin’s] fascination with the Surrealistically orderly disorder manifest by Parisian passages, I imagine that Benjamin himself would not have been entirely unappreciative” of his, Ferneyhough’s, “aesthetic strategy” of “hallucinatory imagery.” This is pompous and hagiographic, as in some graduate student work; it’s also inaccurate, because Benjamin didn’t admire the “Parisian passages” (an obscure way of referring to the passagen, the covered malls) because they had “Surrealistically orderly disorder” but because they were visual tokens of the state of bourgeois culture. So in terms of the writing and the subject, if Ferneyhough weren’t a composer, his work wouldn’t be taken seriously.

2. The music: there’s a lot of talk about the virtual impossibility of performing Ferneyhough’s scores; the usual strategy is to parse them into individual beats, learning them beat by beat, bar by bar, like a new language. 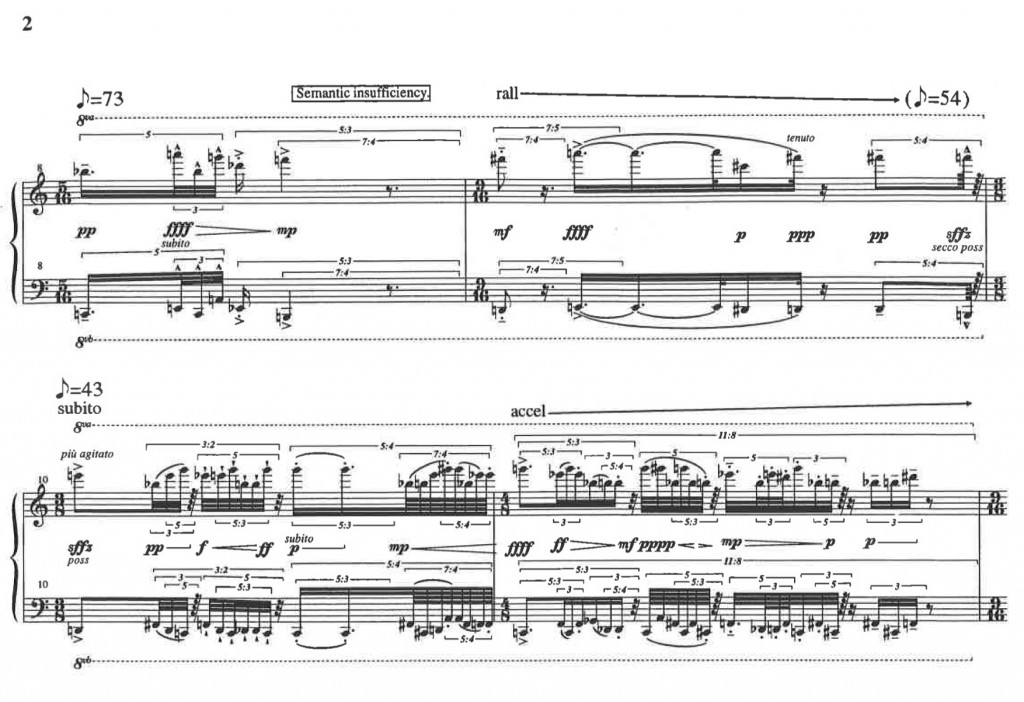 This is clearly a strategy made possible by computer software, which makes these kinds of divisions fun and easy. There are signs that Ferneyhough plays with the software, and is guided by it: the measure numbers are printed very small and close to the stave markings, which is an artifact of the software and would have been corrected in older music engraving; and the title page says “This score is a facsimile of the composer’s manuscript.” The consequence is that it’s entirely reasonable to say there are musical forms here that are suggested by the software: therefore the software should be part of the criticism of the music.

This doesn’t mean Ferneyhough doesn’t hear what he composes. On the contrary, it implies he hears it very precisely, because that’s what happens when you work with the software in this fashion: you make incremental adjustments, and hear each one. That in turn implies that criticism of his work should concentrate on very brief passages, and attend to them in detail. 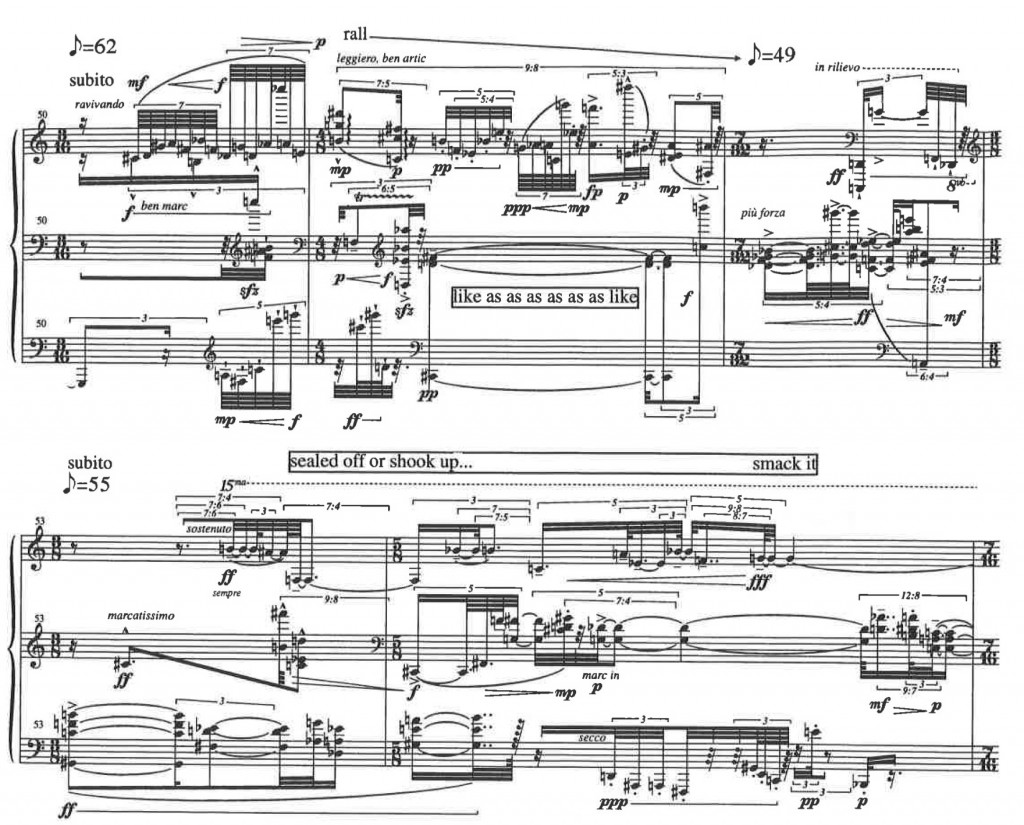 I think there’s a connection between the text and the music, as I’ve described them here. They both show a myopic concern with detail: fragments, tiny images, evanescent forms. They share an obliviousness regarding large-scale structure and meaning; both are obscured by the hope that attentiveness to microscopic textures can result in large-scale significance. The expression, “New Complexity,” is perhaps more accurate than it sometimes sounds: it’s a particular species of complexity, an understanding of what complexity is, that works by tunneling under the meanings of longer and larger structures. For example the libretto and composer’s statements about “Shadowtime” don’t touch the reasons why people find Benjamin significant; and in the same way the detail here doesn’t approach the questions of larger scale that caused modernists such as Carter or Boulez. to create some of their more complex passages. Their sense of detail isn’t Ferneyhough’s: that’s why it isn’t accurate to call Ferneyhough a modernist. What’s interesting about his work is the psychological effect of putting so much hope into the precise reading of an image, a moment, a beat: hoping that they can be knotted, compressed, and finessed so as to produce not only new meaning but a way forward for music after modernism. I don’t think Ferneyhough’s hypertrophied attention to details (either textual or musical) often produces new meaning on a larger scale, and I also don’t see how it is a way forward after modernism: but the tremendous effort of the attempt is itself expressive.