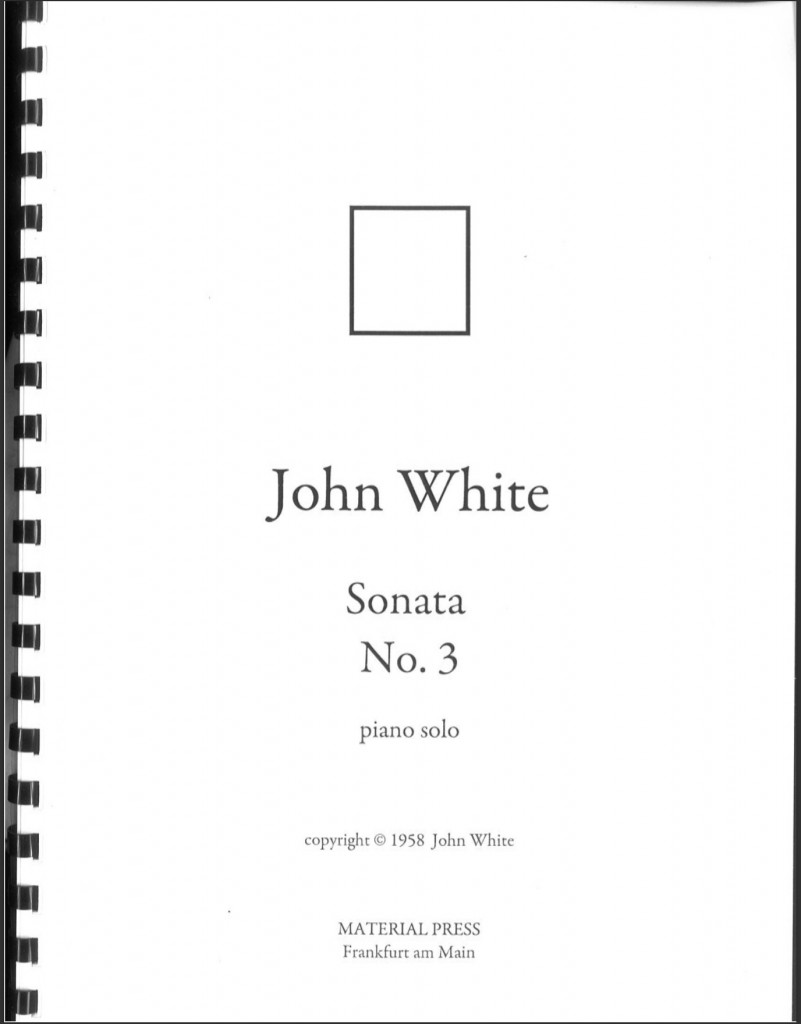 John White (b. 1936) is an English composer; since 1956, when he was 19, he has been at work on a remarkable project: a series of over 175 piano sonatas. For a long time only a few have been available as scores, but recently Material Press in Frankfurt has issued almost 50 of them in the editions shown here.

There aren’t many recordings of White’s sonatas, and there isn’t a tremendous amount of writing about them. The two principal sources I’m aware of are Dave Smith’s “The Piano Sonatas of John White”  (1980, updated in 2004), an essay by Virginia Anderson called “John White and the Alternative British Experimental Aesthetic” (2011), and a passage by Smith in an essay published in 2010. 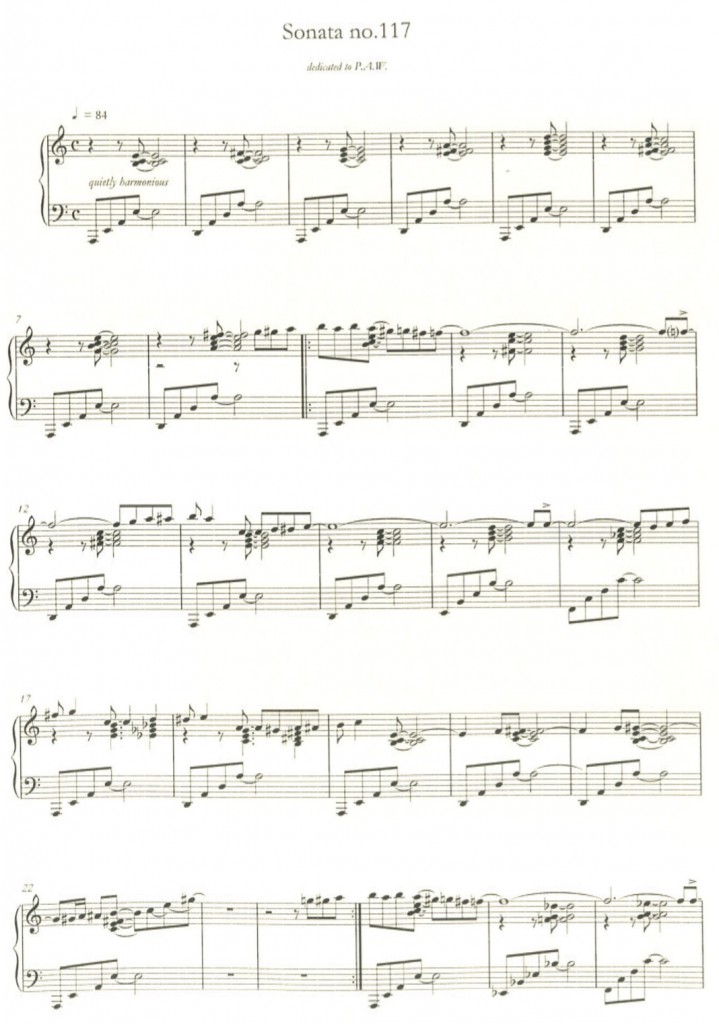 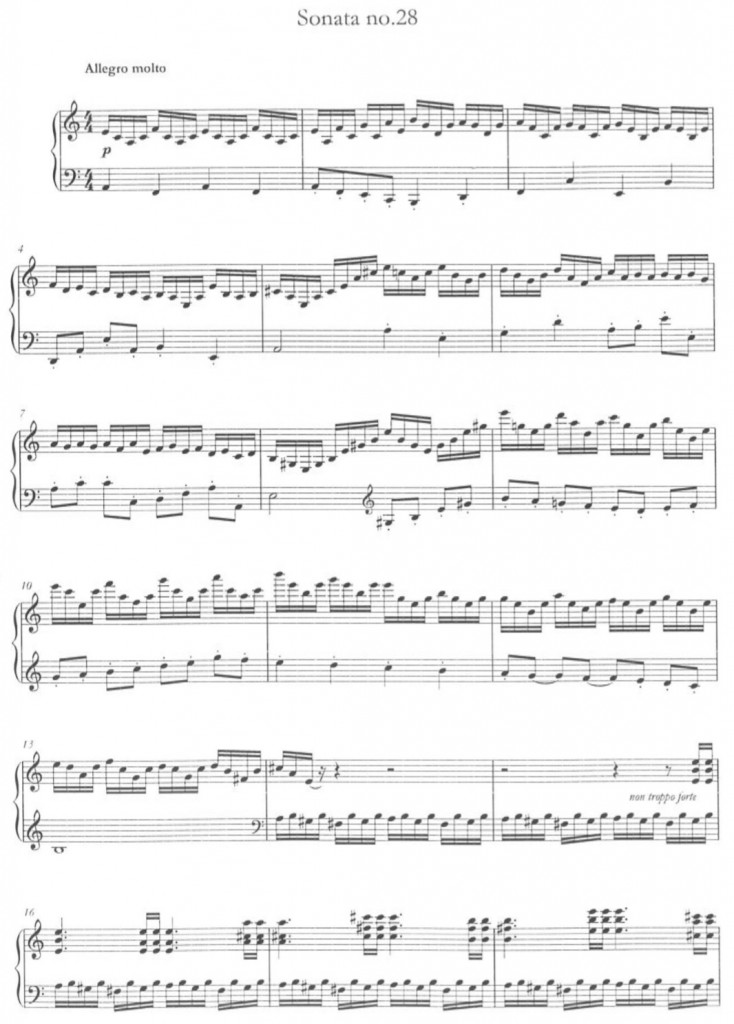 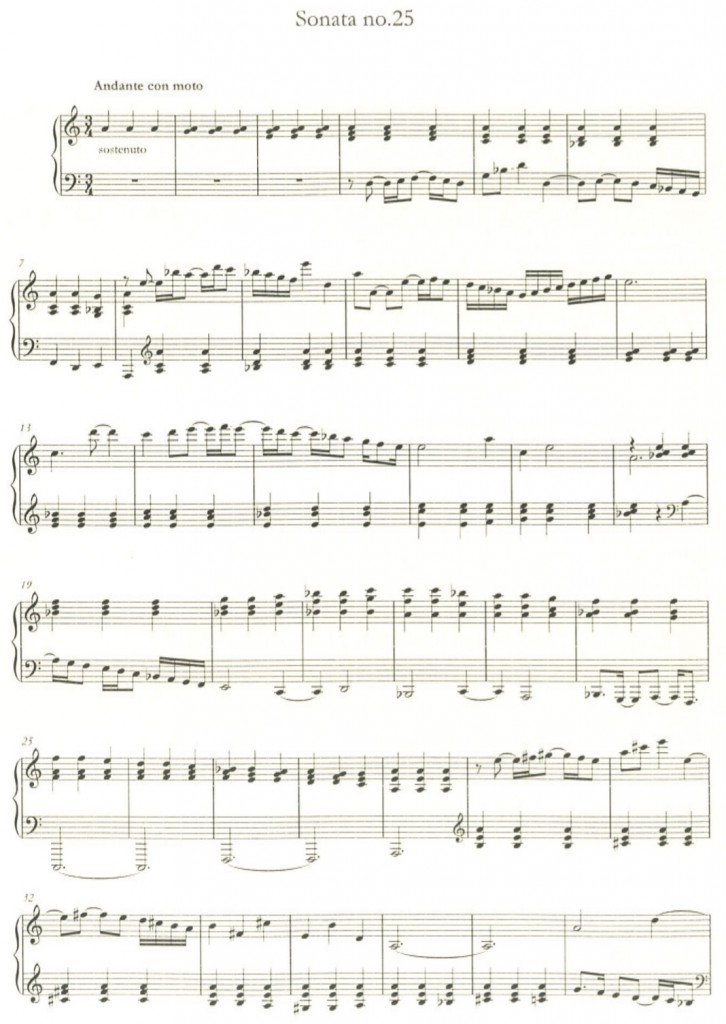 My own knowledge of these sonatas comes from recorded performances, and from playing through about 35 of the sonatas that I have bought, both from Material Press and Alphonse Leduc (which has a gorgeous edition of the exceptional Sonata no. 5). There are recordings and videos of sonatas 1, 4, 5, 9, 95, 138, and about 30 more recorded by Roger Smalley for NMC. (I haven’t made a full count: I’ve been more interested in buying and playing the scores.) Eventually there will be a full recording, and possibly an affordable edition of all the sonatas, but even then the question I want to explore will remain: what kind of attention is involved in listening to such a large corpus of work, spread over such a long period of time, embracing so many styles?

Here are three possibilities, in ascending order of promise: listening for influences; listening for the structure of each piece; and listening for what Virginia Anderson calls an “alternative experimental aesthetic.” 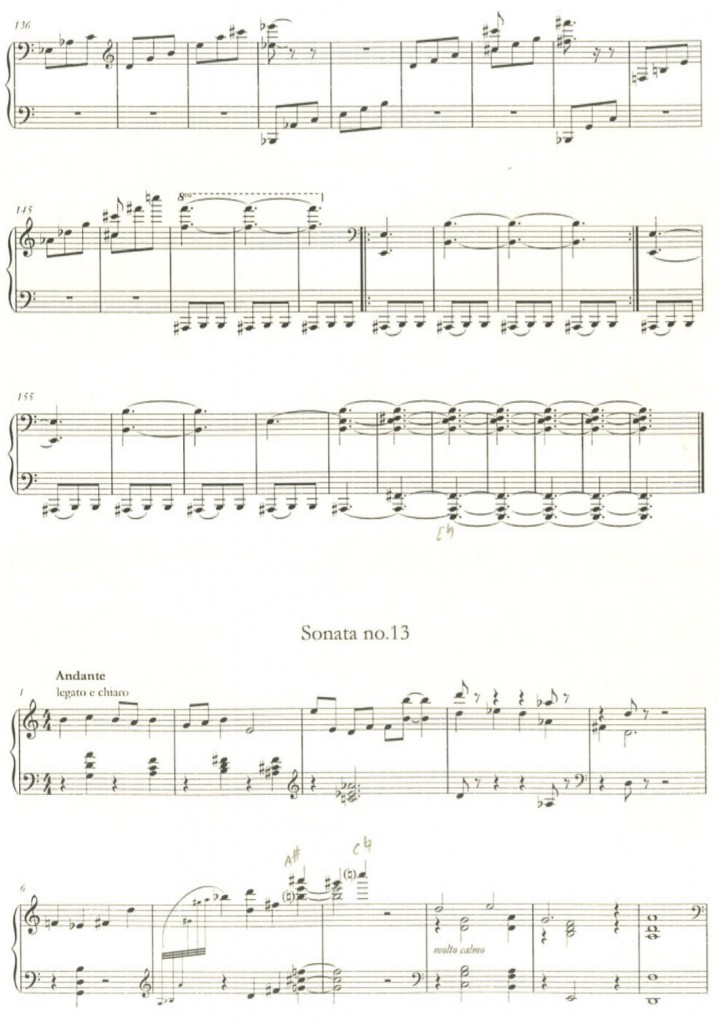 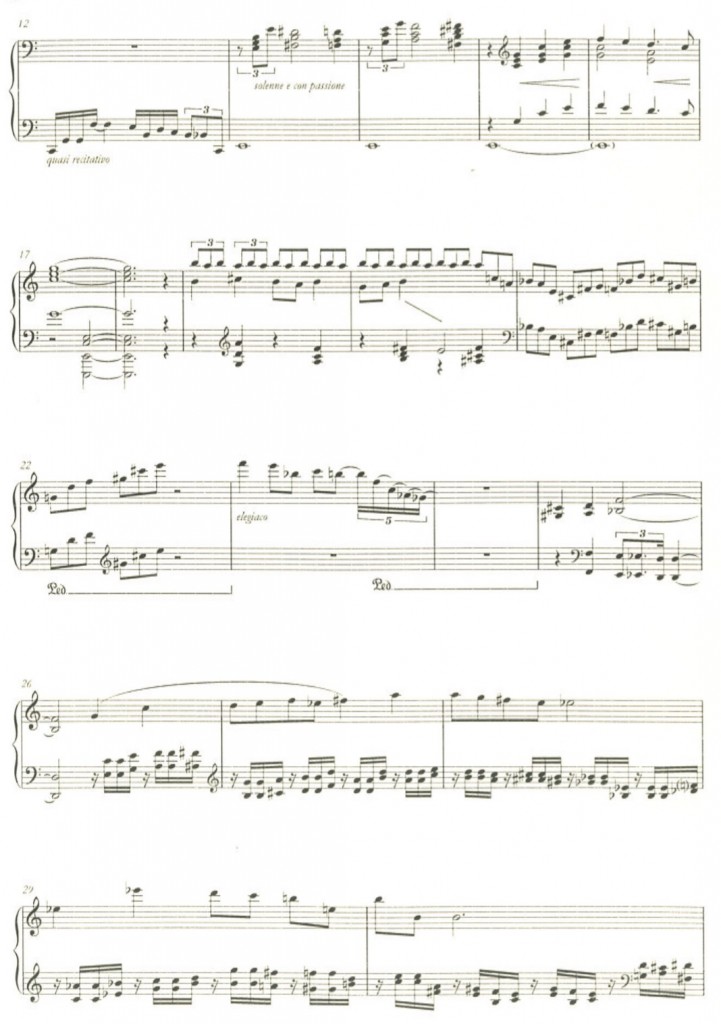 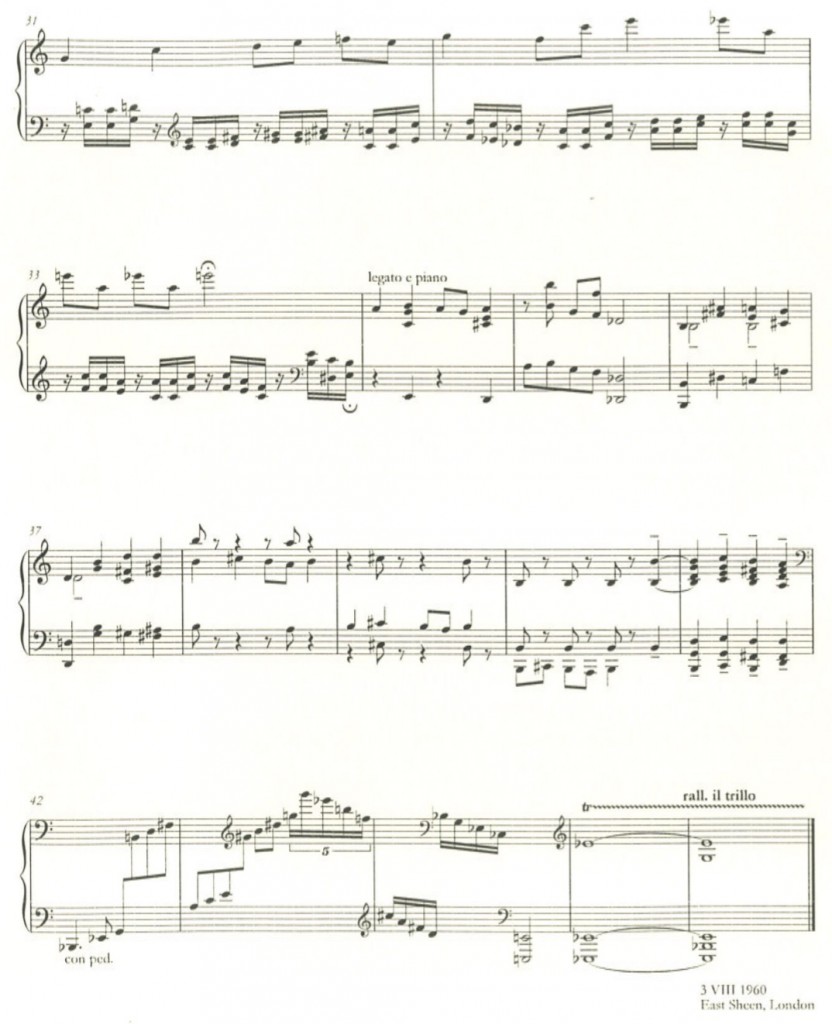 What interests me is how to pay attention to a corpus of work that is so large, spans such a long time, cannot easily be heard or played in its entirety, and is so closely tied to the life of its composer that it functions more as diary or experiment than as a musical opus. 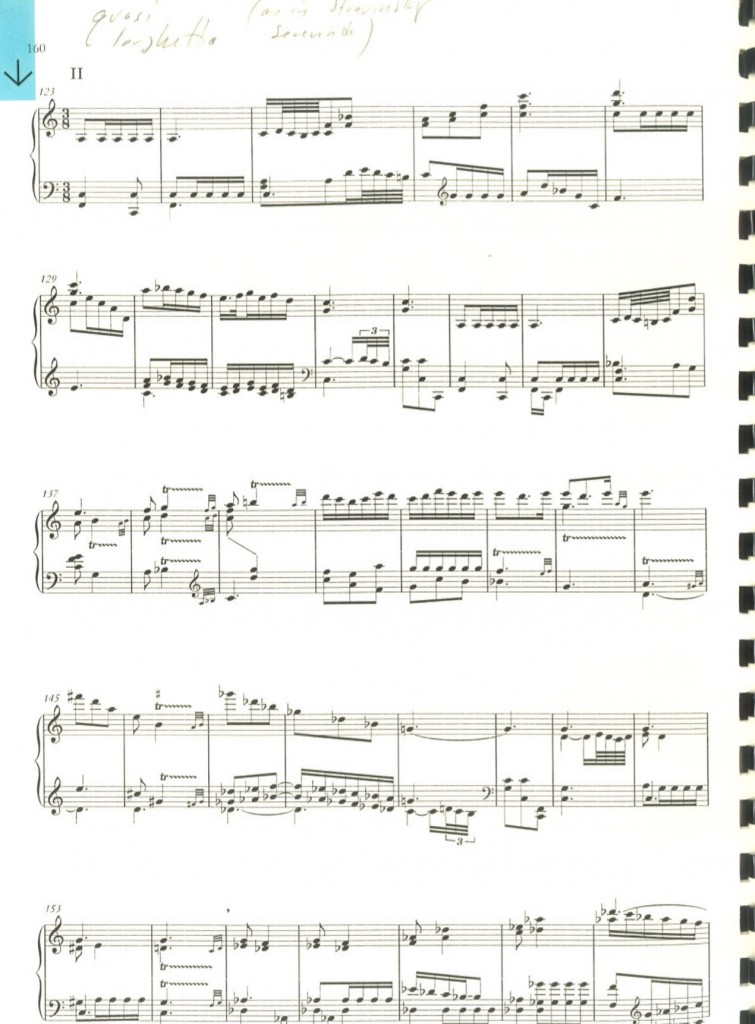 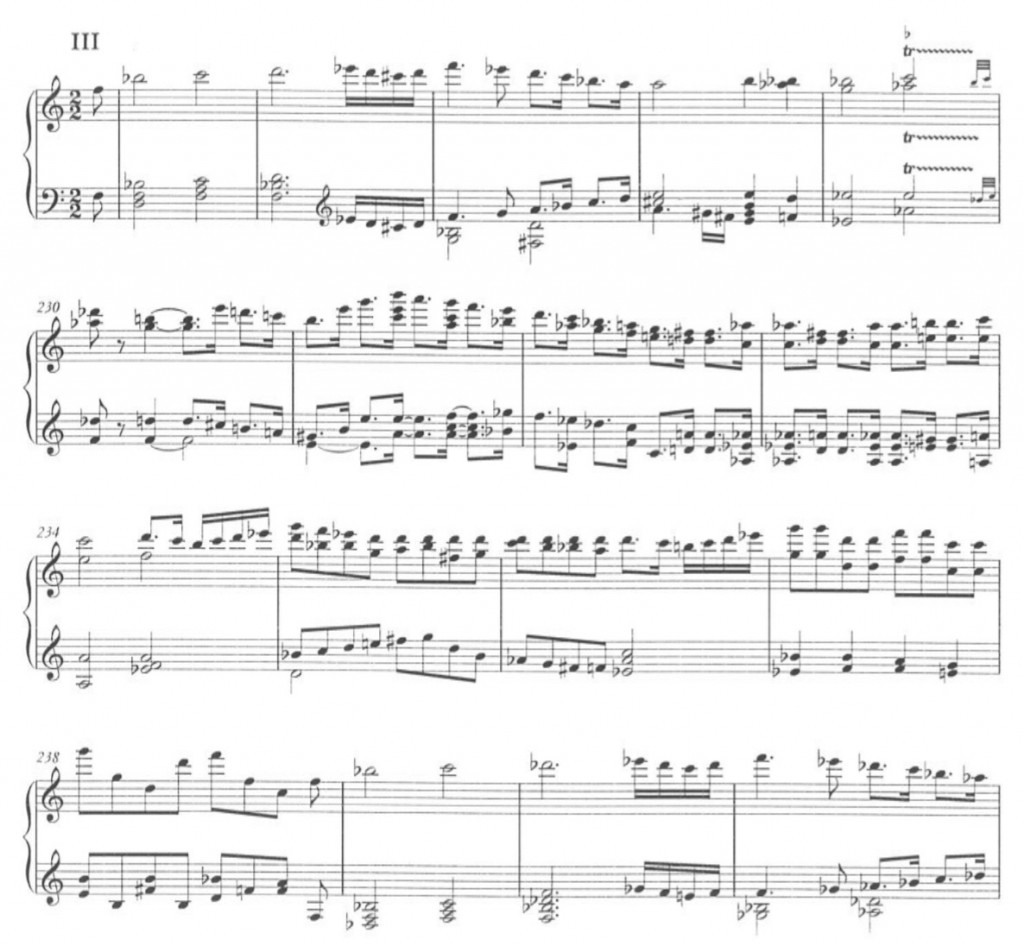 Sonata no. 17, opening of the third movement. 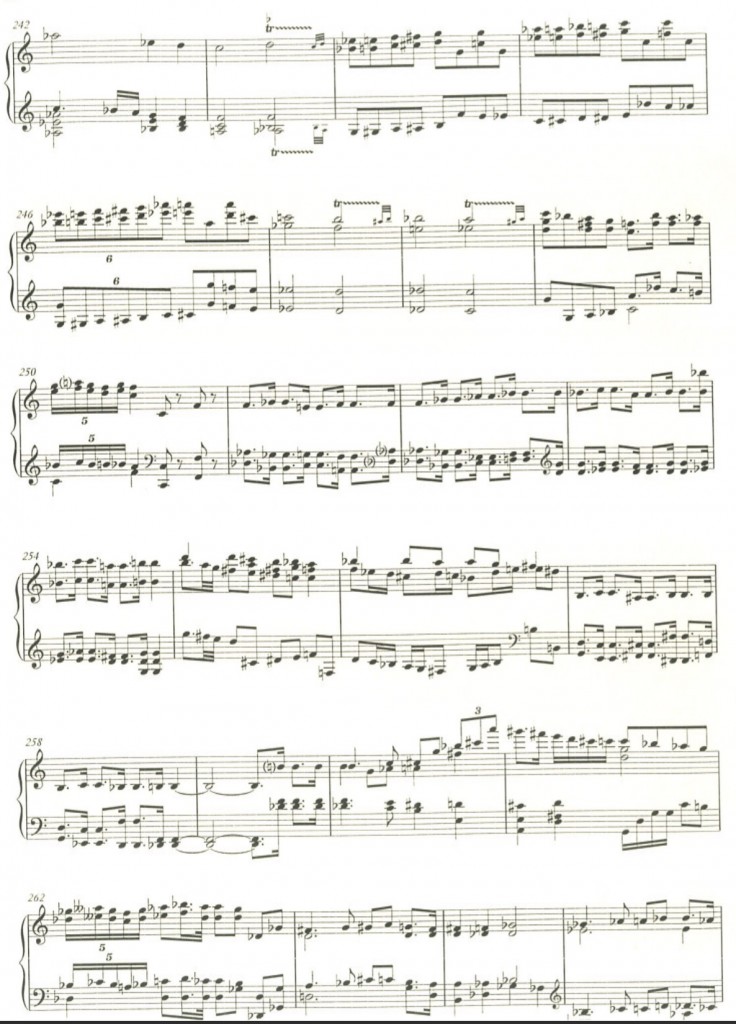 Sonata no. 17, continuing the excerpt of the third movement.

Regarding influences, here’s what Wikipedia says, as of 2016, quoting Dave Smith:

White’s style is informed by what Dave Smith called an ‘apparently disparate collection of composers from the world of “alternative” musical history’, including Satie, Alkan, Schumann, Reger, Szymanowski, Busoni, and Medtner. These composers have influenced his piano sonatas… but other influences on his wider work include Messiaen, Rachmaninoff, and the electronic pop ensembles Kraftwerk and The Residents. Although it is so eclectic as to cover a wide range of styles, White’s work has been called ironic, ‘experimental’, and even ‘avant postmodern’.

This is more or less correct, I think–Smith adds “van Dieren, Fauré, Godowsky, Liszt, Martin, Messiaen, Satie, Poulenc, and Sorabji–but it is a curiously open-ended list. (I might immediately add Debussy and Stravinsky, as in Sonata 16, excerpted above.)

The fact that it isn’t possible to come up with a list of recurring influences, and that the list seems oddly open-ended, indicate that there is something going on other than the ordinary signs of influence. Smith notes that White likes to make brief, incomplete allusions to other composers, which partly turns his work into a guessing game. But he does not quote passages, like Rochberg or Schnittke; White’s allusions “seem to flash by,” as Smith says; they are part of the texture of listening, not puzzles that need to be solved. 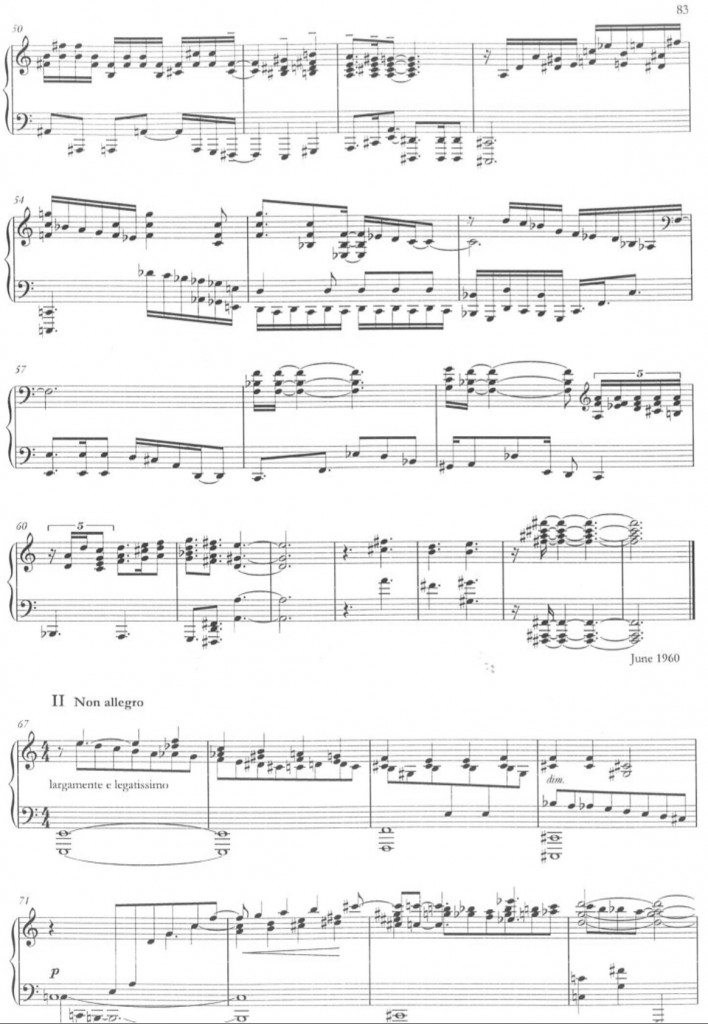 It is also possible to listen by attending to the emergence, or the possibility, of recognizable structures. White’s preferred form owes a lot to 19th century fantasies, such as Beethoven’s Op. 77, Liszt’s Sonata, or Schumann’s open structures. Many of his sonatas have separate movements, but many don’t. A large number repeat motifs and textures, but others don’t. 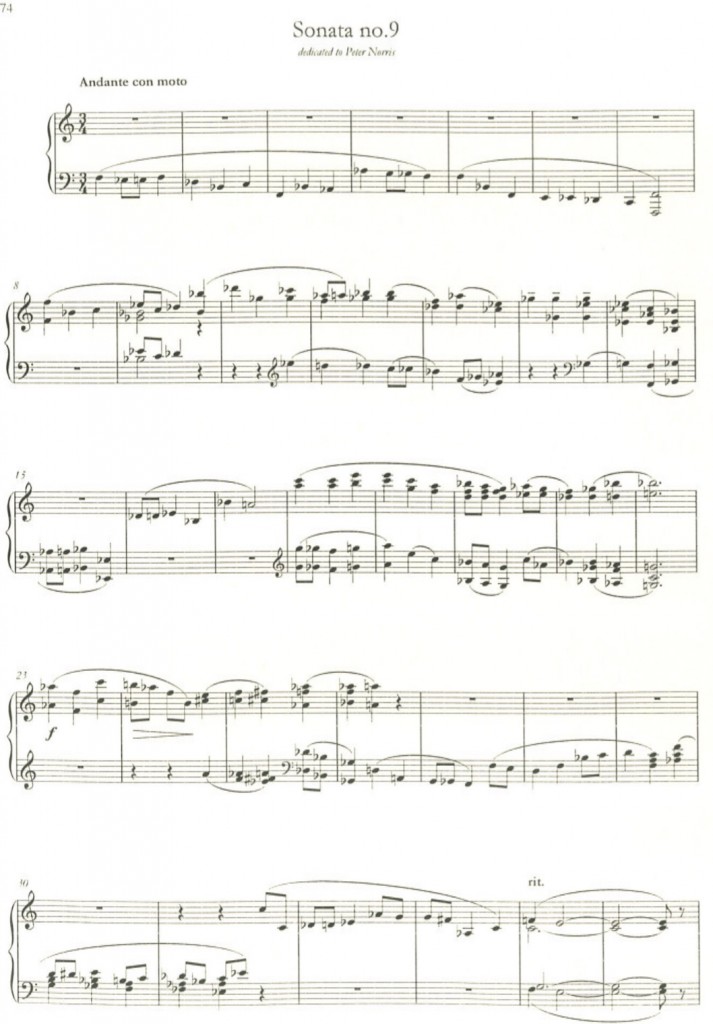 Structure is an open question: when there are multiple movements, it’s possible to listen for sonata, rondo, or song forms; when there is only a single large movement, the model remains the late Romantic fantasy. In many cases, for example Sonatas 12 and 13, very short forms become Albumblätter, and have an intentional lack of closure. Listening for form is one of the principal interests of the experience of moving between one sonata and the next. 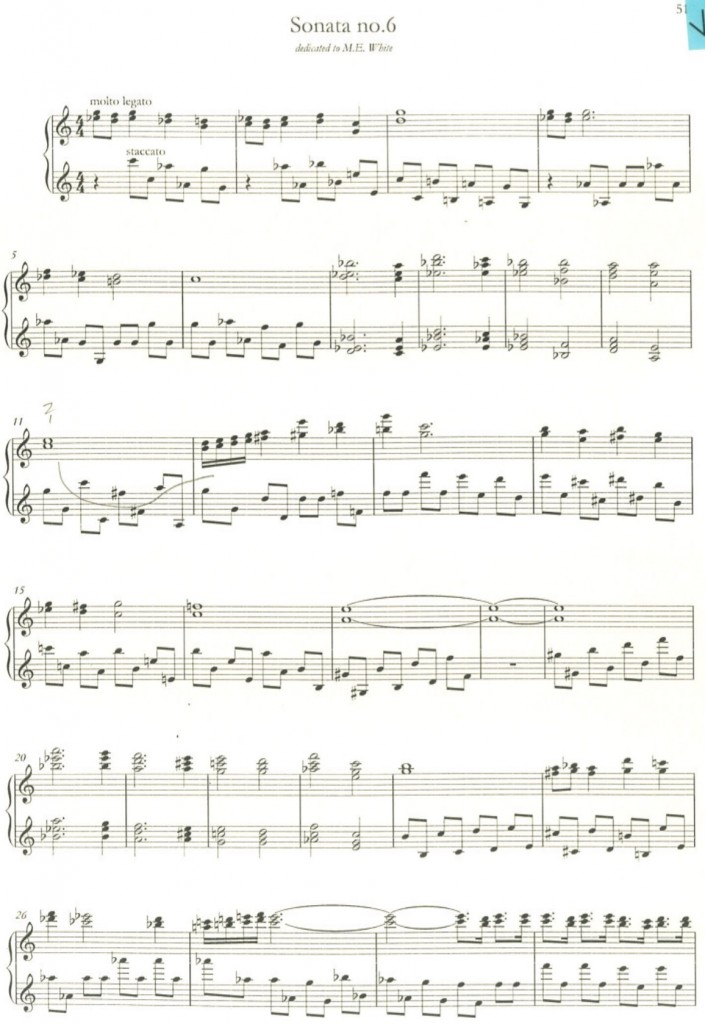 Some sonatas are slight–just two or three pages long–but others are as large as Romantic and late-Romantic sonatas. The shorter ones occasionally lean on Debussy (as in Sonata 132) or arpeggiated studies from Schumann through d’Indy or Richard Strauss (Sonata 24). White also plays with formlessness, and lets some sonatas diffuse or simply end (Sonata 20). He has always had a propensity to let repeated rhythms carry off the structure (Sonata 35).

In the search for structure, which I think is one of the main problems these sonatas present to the listener, tonality is as often a distraction as a help. Smith notes the early sonatas’ “anti-formal” and “tonally confusing” qualities; in later sonatas tonality is not often structurally significant. 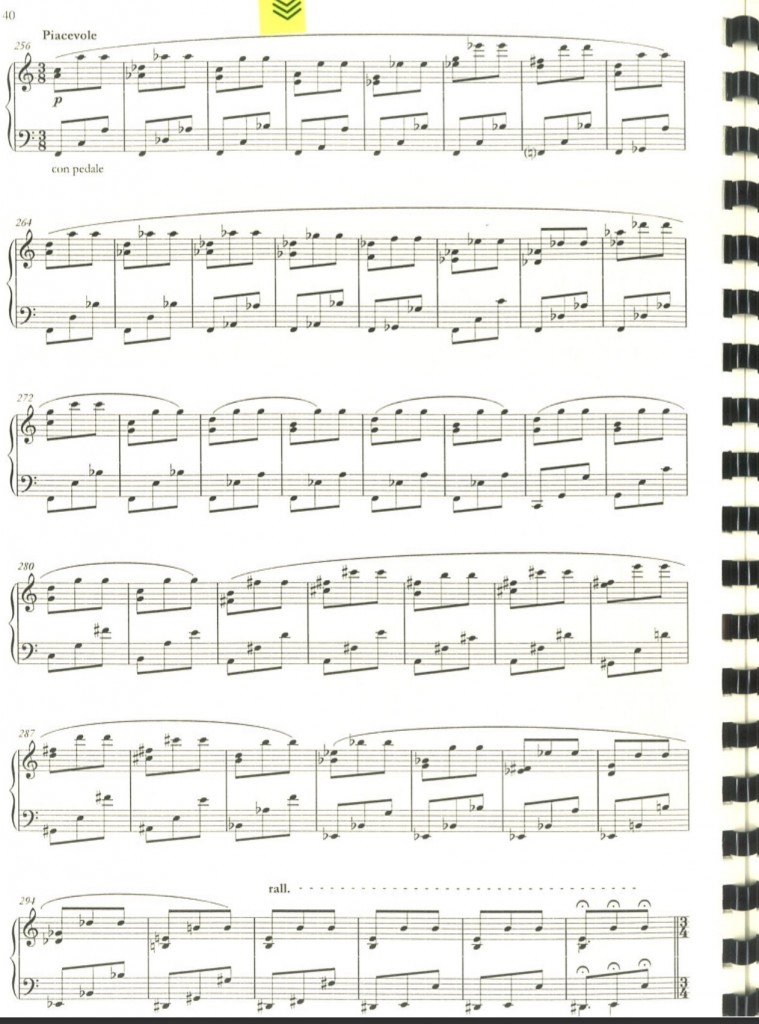 Listening for an alternative form of experimentalism

Anderson locates White in an “alternative” experimental tradition. “White’s incuriosity about the European avant garde,” she writes, “might be blamed on atypical British compositional conservatism, but for his enthusiastic entry into experimental indeterminacy and the alternative ‘canon’ of his own creation.” Part of his project, she writes, is the idea that the sonatas are like a diary, reflecting fleeting influences the way that occasional pieces in the 19th century repertoire reflected fleeting moods. This would be a way of paying attention to the sonatas: his alternative experimental tradition would be a particular sort of eclecticism different from the appropriations of postmodernism, or the lingering nostalgias of late Romanticism.

In a 2011 email to Anderson, White explained his method this way:

I see my life in music as being at a party in the company of a lot of extremely interesting and diverse people. I keep encountering new names [including Skalkottas, Lyatoshinsky, Karamanov, Koechlin, and Roslavets], all with something interesting or fun to say.... Some of this rubs off, some just remains in the ‘attic’, ready to be taken out, dusted down and swung into action.

Anderson says this can result in a “kind of Ivesian diegeticism,” but in general it can provide a listener with a temporal structure: a given sonata may move easily and in an unstructured way back and forth through often unspecifiable moments in the musical history of the last several centuries. And again, that would be a relation to the past that is different from the sometimes brutal or rum appropriations of the 1980s, or from the retrospective allusions of late Romantic composers of the first half of the 20th century. The sonatas are a major body of work, spanning an unusually long period of time, and for those reasons they are a good candidate for a recognizable “alternative experimental aesthetic” in the postwar period. 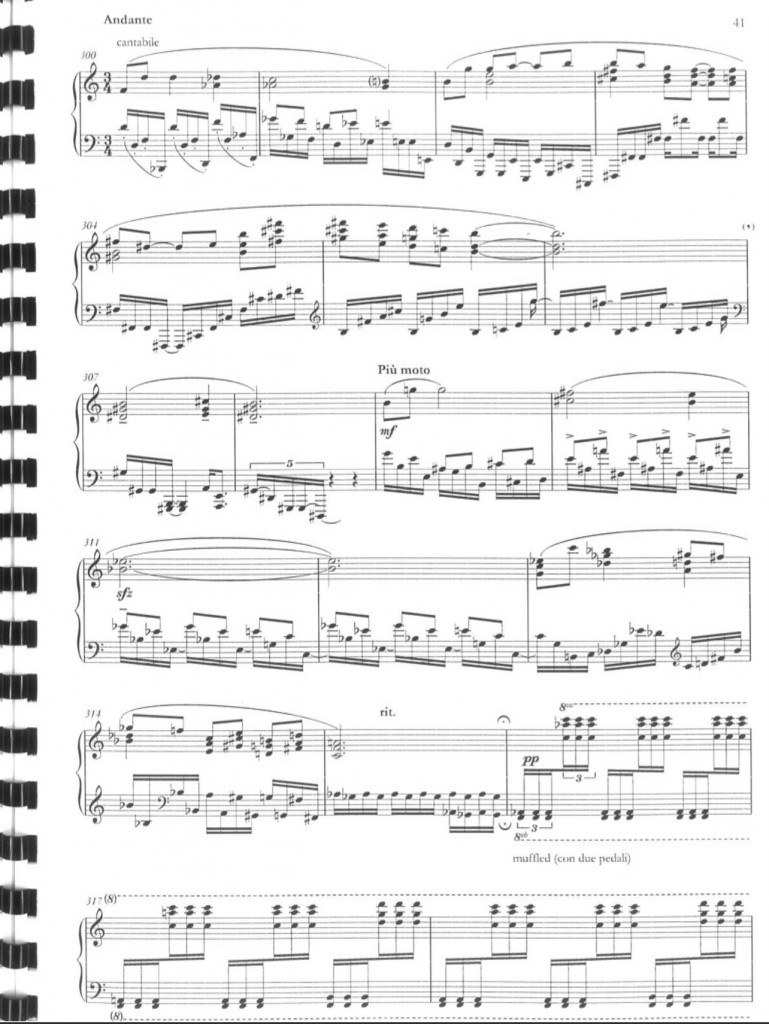 Sonata no. 4, continuing the excerpt.

A note on playing the sonatas

In terms of performance: White favors repeated figures that continuously modulate, so it is difficult to play through most of his sonatas without practice. They range from easy to difficult on the usual scale, but an adequate play-through requires rehearsals.