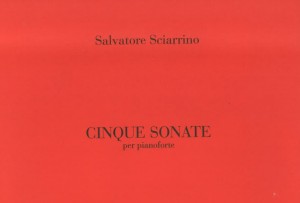 The Sicilian composer Salvatore Sciarrino (b. 1947) has written five piano sonatas, published together by Ricordi. Most are to be played very quickly; the Third Sonata is marked “as fast as possible.” One result is that ornaments, for example sequences of grace notes, can seem slower and more articulated than the passages they accompany, confusing the principal voice and its ornament. A precedent for this, and an influence here, is Stockhausen, especially perhaps the Klavierstück X: 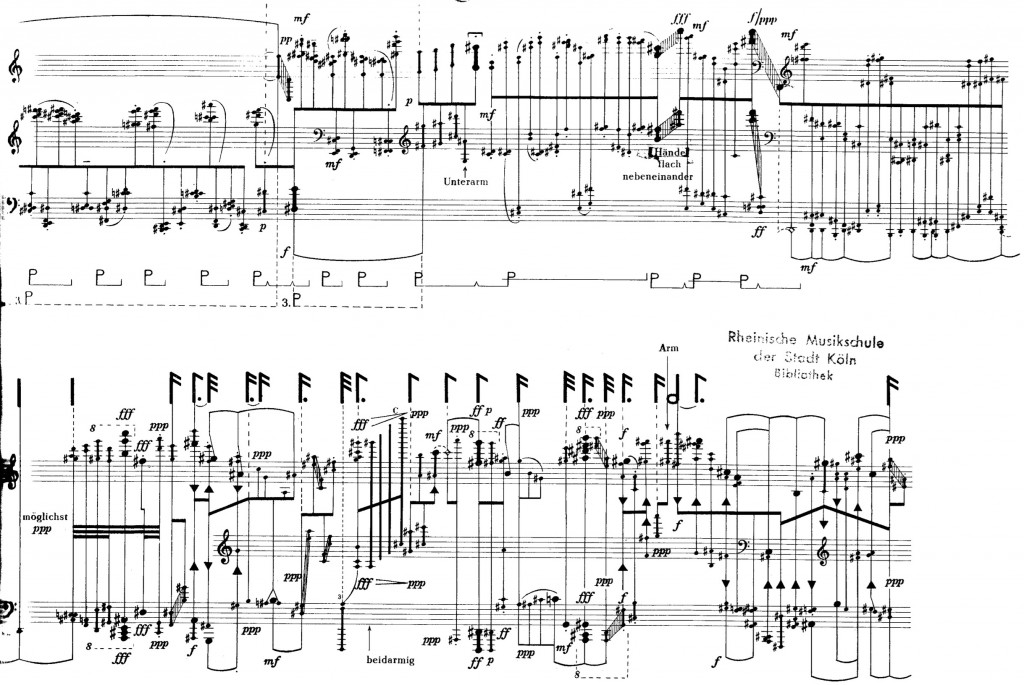 Philosophically, the interesting possibility is that the music overturns the usual relation between structure and decoration, ground and figure, melody and ornament. This isn’t the usual way of talking about Sciarrino’s work, because when it’s considered as an example of spectral music, what matters is the construction of sounds (harmonies, implied notes, timbres) and not the work’s structure considered in a conventional sense. Still, the notation itself raises the question of ground and figure.

A first strategy is melting the usually articulated elements of the principal melodic or rhythmic elements into passages of blurred or indistinguishable notes.

None of the five sonatas have easily playable portions. It would be possible to say they demand as much work as Boulez’s Second Sonata, except that the kind of work would be different. It is not clear what would count as an adequate performance of Sciarrino’s First, Second, Third, or Fifth Sonatas, because so much of any performance is lost in a blur of notes. He himself indicates as much in some performance notes: for example some runs of sixty-fourth notes will be slower than others depending on the nature of the leaps. Note that he allows some passages to “melt into organic figures” comprised of “imperceptible” notes. 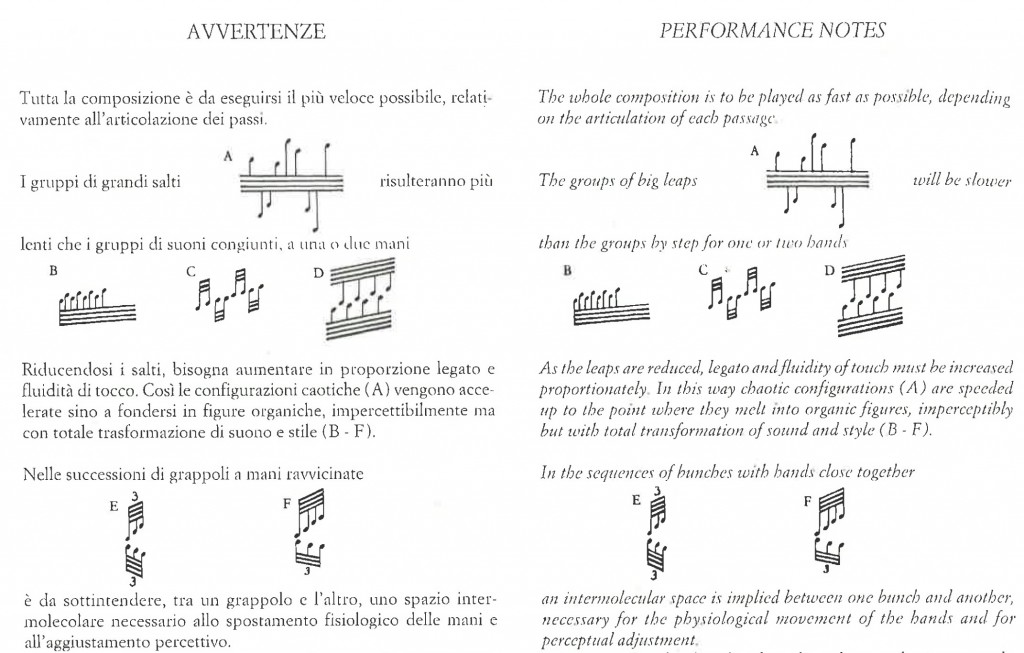 The First Sonata is more conventionally annotated, with curving slurs reminiscent of Franco Donatoni’s piano pieces. But even here, the long passages of grace notes can come out more articulated, and slower, than the surrounding full-size notes: 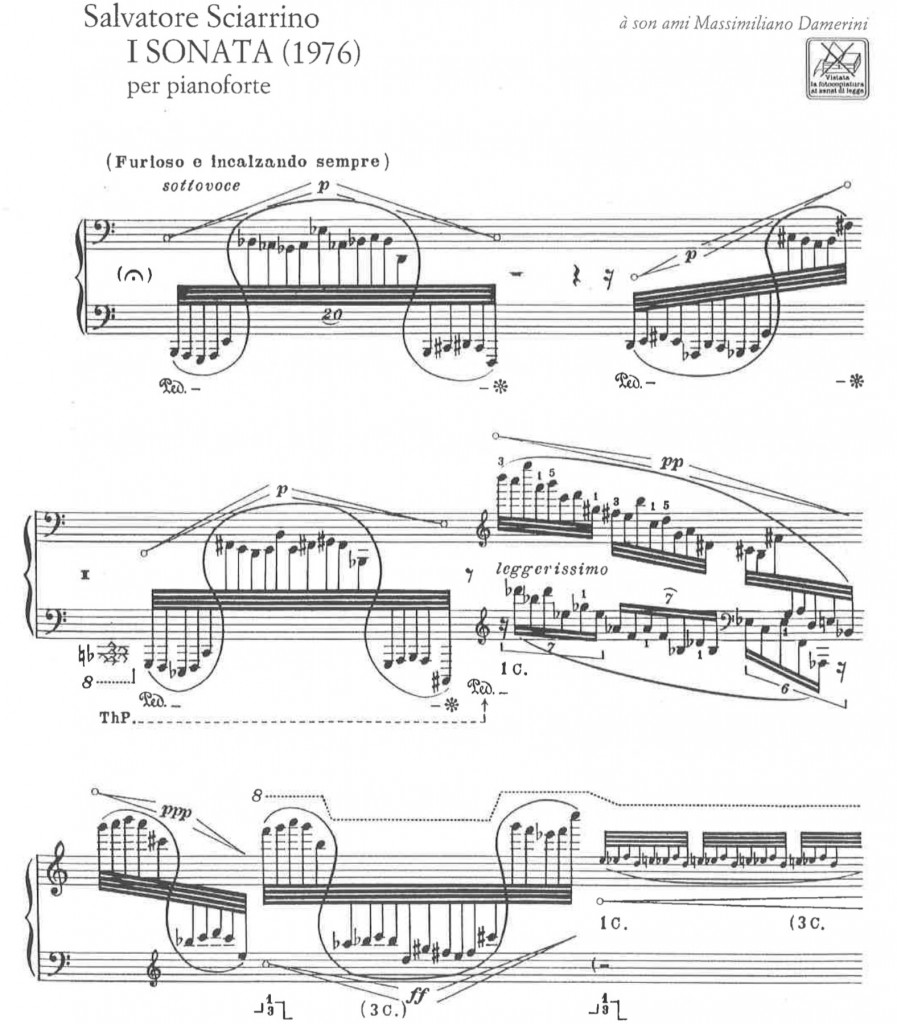 Trills can sometimes create a three-part hierarchy of sound: the grace notes are “slowest” and therefore easiest to hear note by note; the trills are faster, but still audible note by note; and principal notes are generally blurred: an inversion of the usual relation. 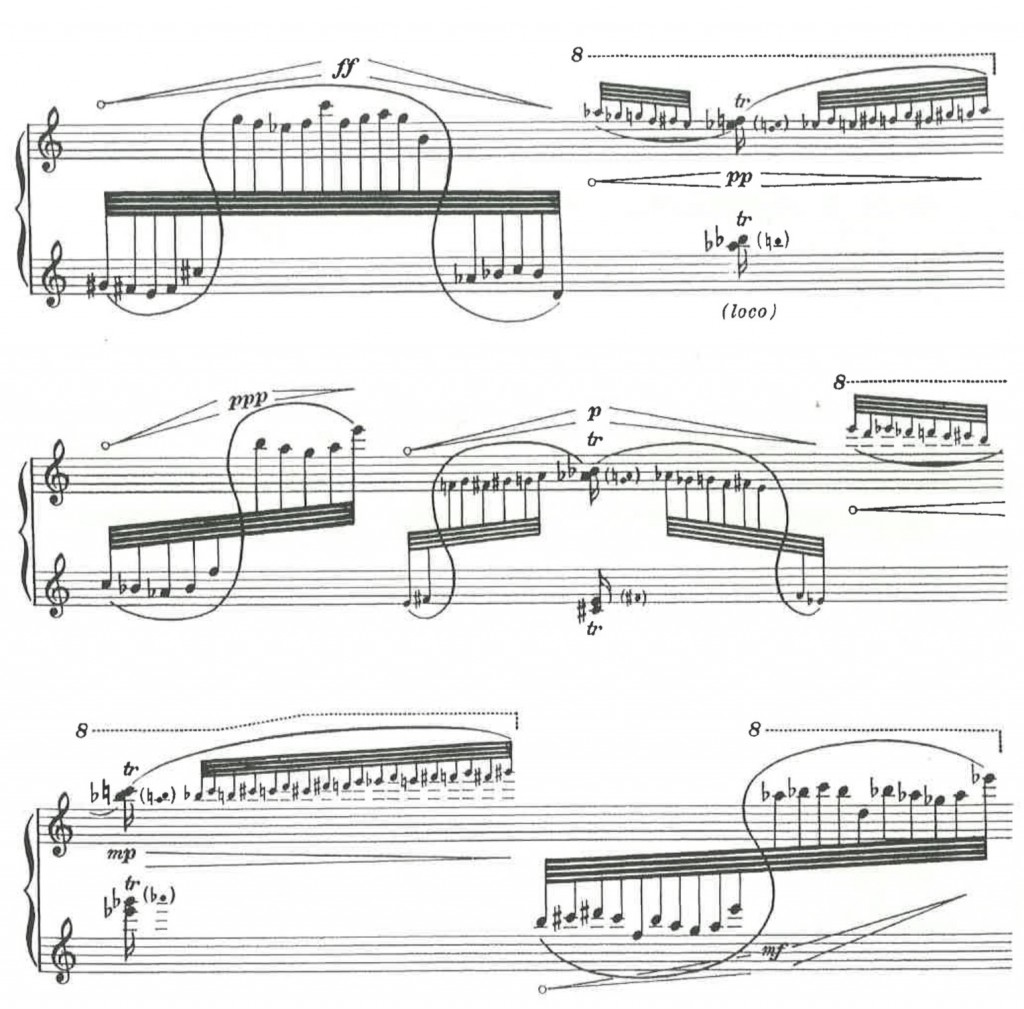 In the Third Sonata, most of the score is “ornament,” written in fine (light) ink, and it is interrupted by principal notes, written in bolder ink. Those interruptions, however, are themselves often in the form of appoggiature or acciaccature, so they seem like grace notes leading into melodies or rhythms that never appear. Some lead into quick sequences of louder chords, but many lead to nothing more than a continuation of the incessant leaping figures that comprise the principal material of the piece. It’s an inversion of figure and ground, ornament and melody, that is more thoroughgoing than Stockhausen’s. It’s this inversion that is, for me, the principal interest of several of the sonatas. 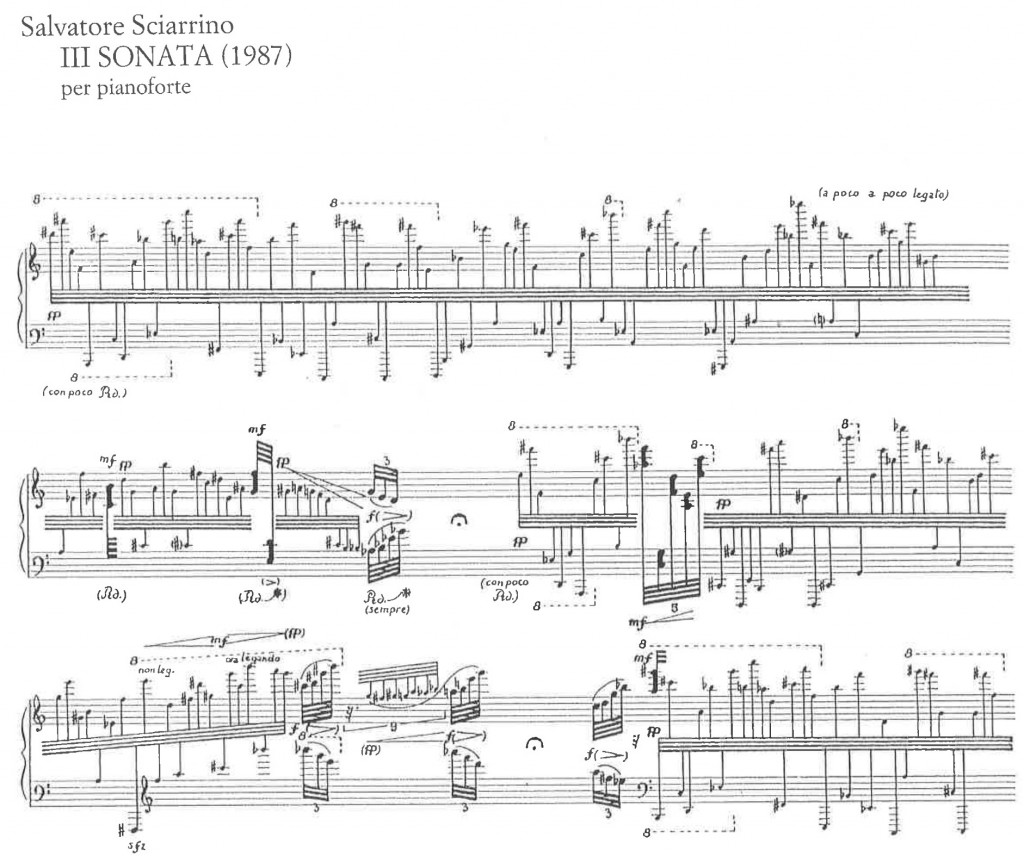 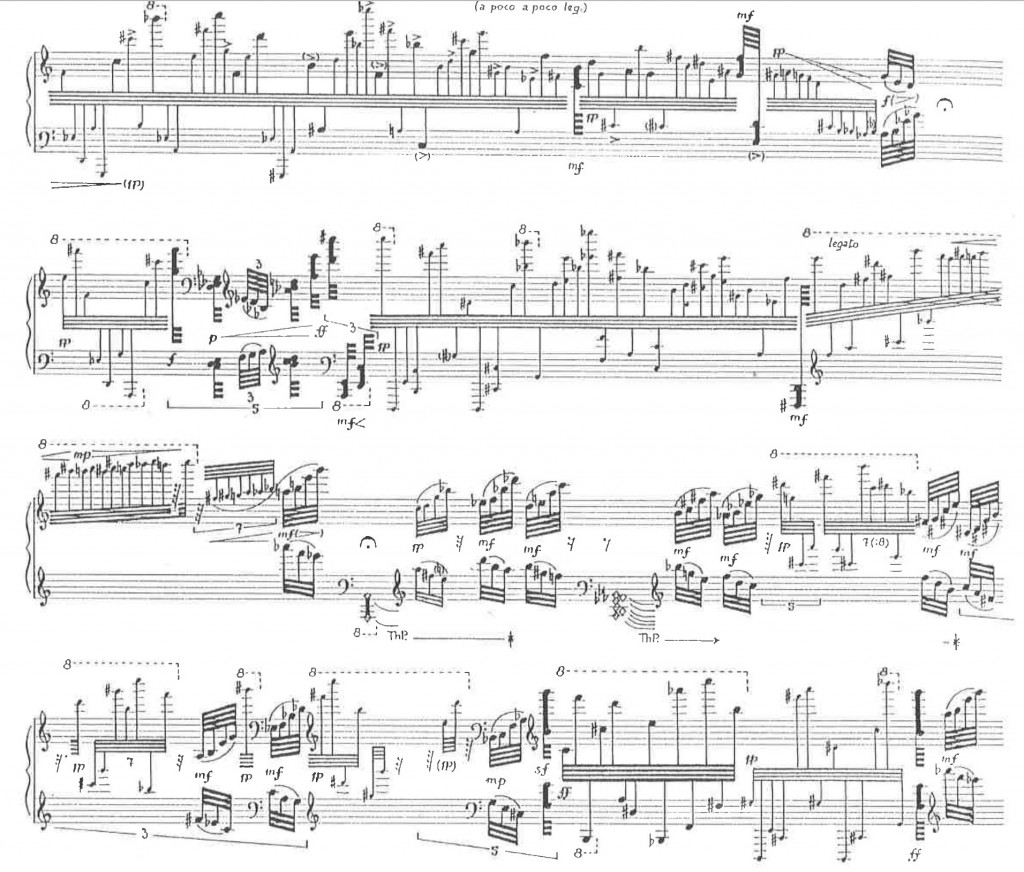 Of course this form of composition leaves many things undecided, for example the overall structure of the piece. I find the majority of Sciarrino’s sonatas unconvincing in terms of large-scale form. They propose intriguing structural ideas and possibilities, but it is not always easy to see if any larger structural form or sequence justifies their length.

achieves a particular energy and density by the mutual interruption of parallel dimensions – a process described by Sciarrino as “windows form.”

These “parallel dimensions” are presumably (a) the chromatic clusters, which “have their own duration and weight”; (b) the principal passages of running figures, which have different speeds and levels of articulation but “melt” “imperceptibly” into one another; and (c) the boldface sequences of shorter notes, which aren’t mentioned in the performance notes but are clearly articulated in the score. “Windows form” is an interesting metaphor, because it is not clear which of the three breaks in order to give a view onto which of the others. 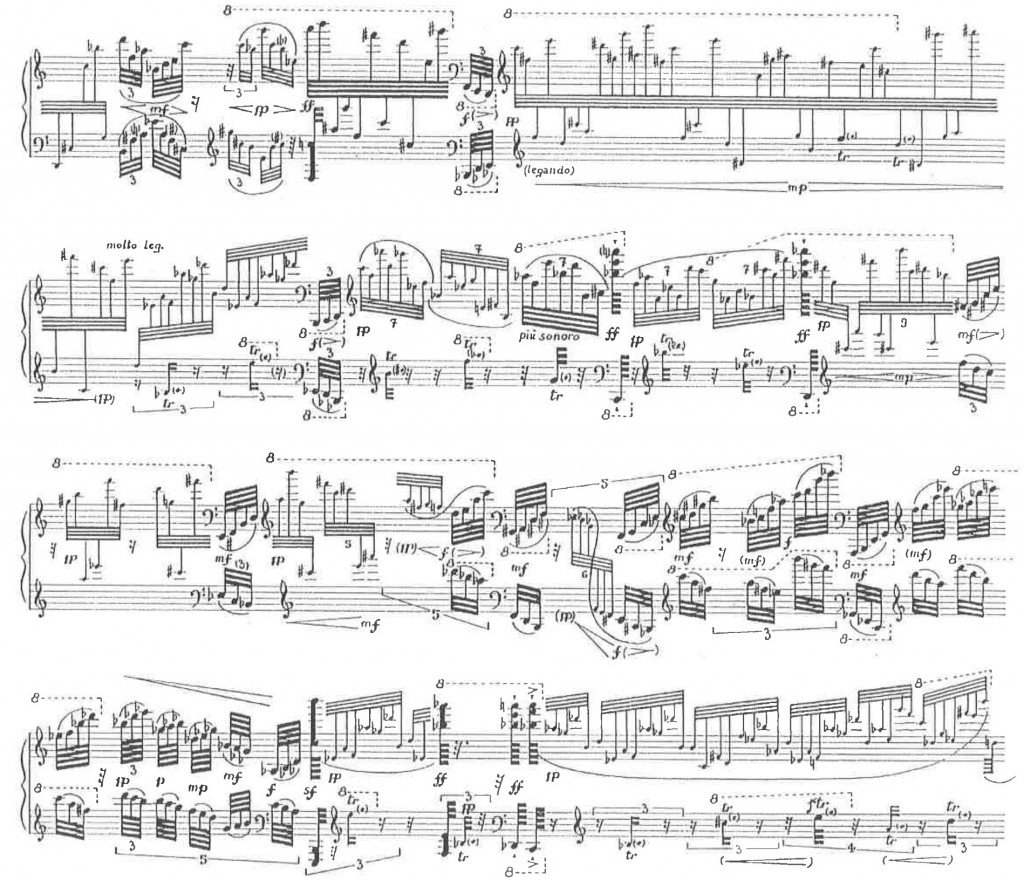 In this way of conceiving music, the “imperceptible” “blurs” can proceed, by infinitesimal degrees, toward or away from the inaudible. the IRCAM site has an entry on Sciarrino that emphasizes this:

A reduction to silence, or an emergence from silence to a continuum of different kinds of perceptibility, is another way of undermining the dichotomy between figure and ground, ornament and melody, grace note and principal note, decoration and structure.

Sciarrino’s website has a helpful page of sources, which includes an essay relating Sciarrino to Giordano Bruno’s theory of infinite worlds, and an essay proposing that Sciarrino’s vocal music works at the level of the breath and the incipient sound as much as at the level of ordinary articulated speech:

I find these possibilities interesting but not always musically rewarding. Of the sonatas, I am most interested in the fourth, which does not participate in any of these ideas. It is, as the English-language Wikipedia says, “percussive.” Most of it is a simple, obsessively repeated structure of loud clusters at either end of the keyboard, alternating with sequences of three notes: 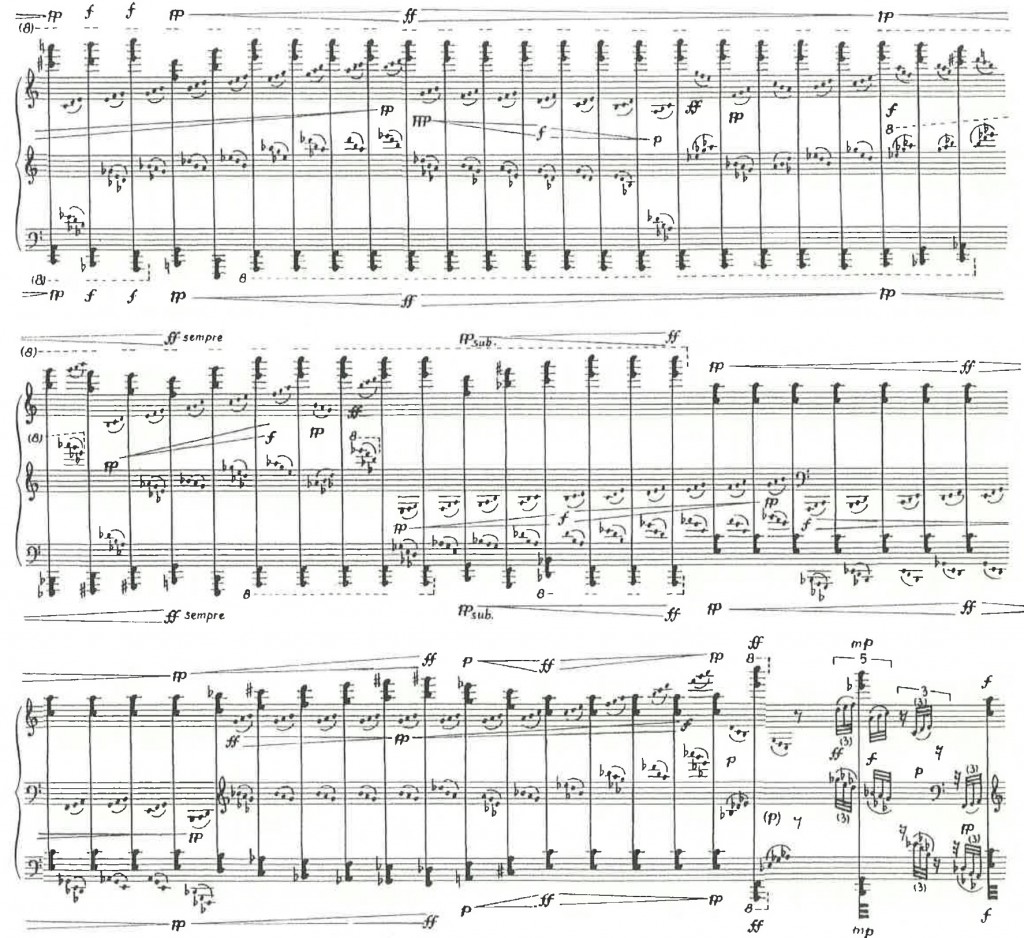 Both the clusters and the sequences of three notes drift up and down the keyboard, creating fragments of melodies. Because the pattern is unremitting, it quickly becomes unclear whether the three-note sequences are upbeats to the clusters, or are to be heard as following the clusters. Every once in a while Sciarrino skips a beat or staggers the rhythm; those moments work as signals to the listener that there is, in fact, no steady rhythm, but only a principle of contrast. 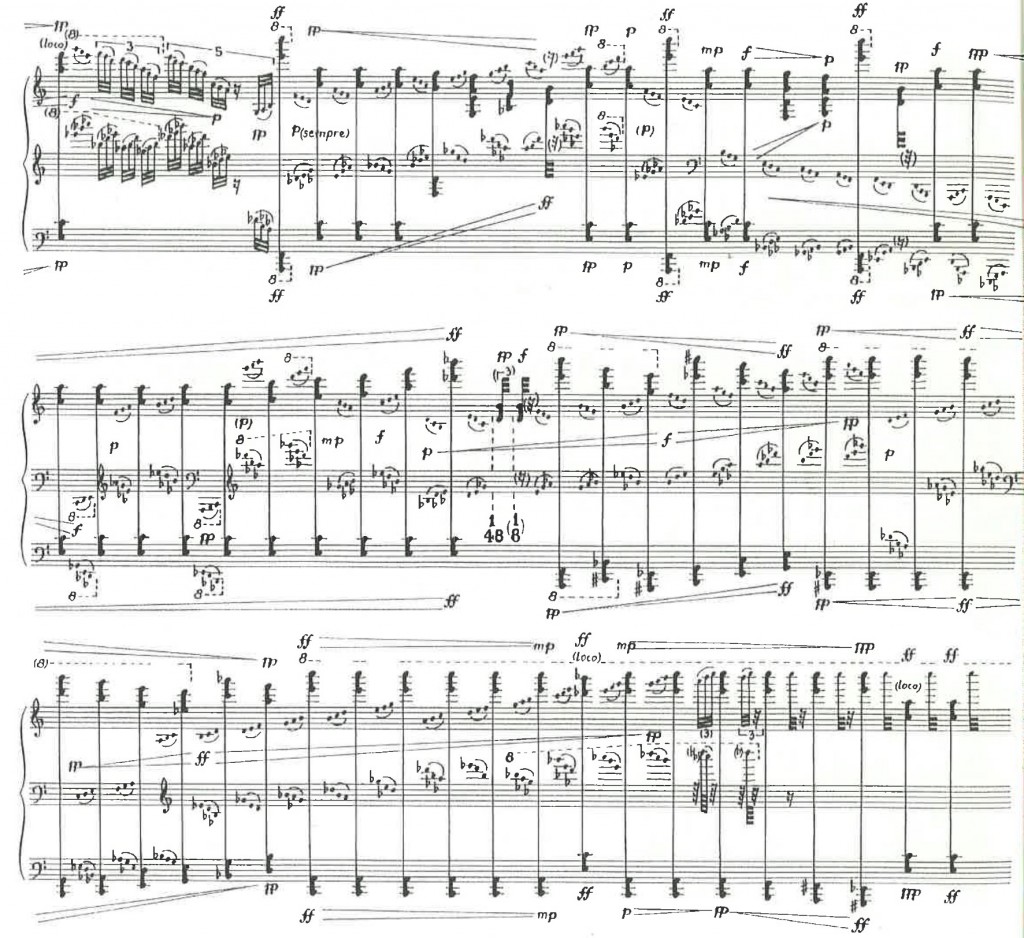 Or this passage, where a climax descends to a 7/32 stagger, and then back into the rhythm: 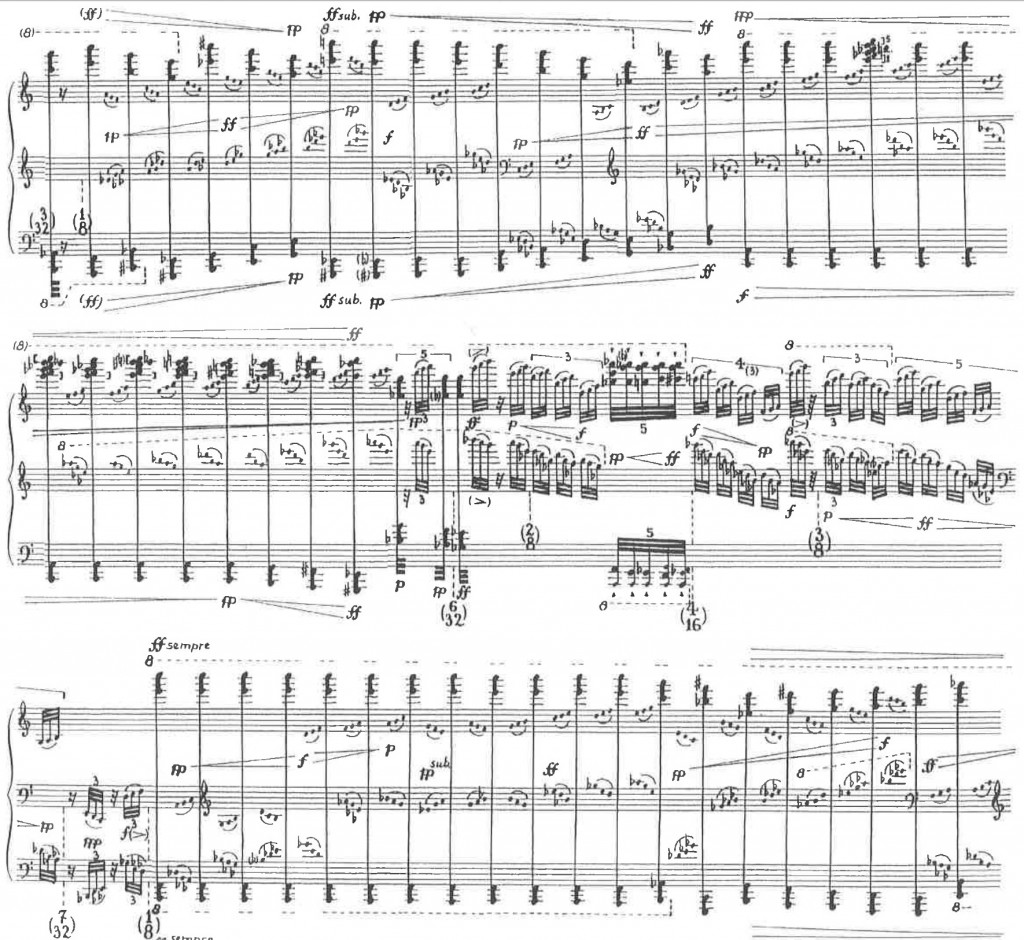 The Sonata ends with a dissection of the two elements and a reduction to silence: 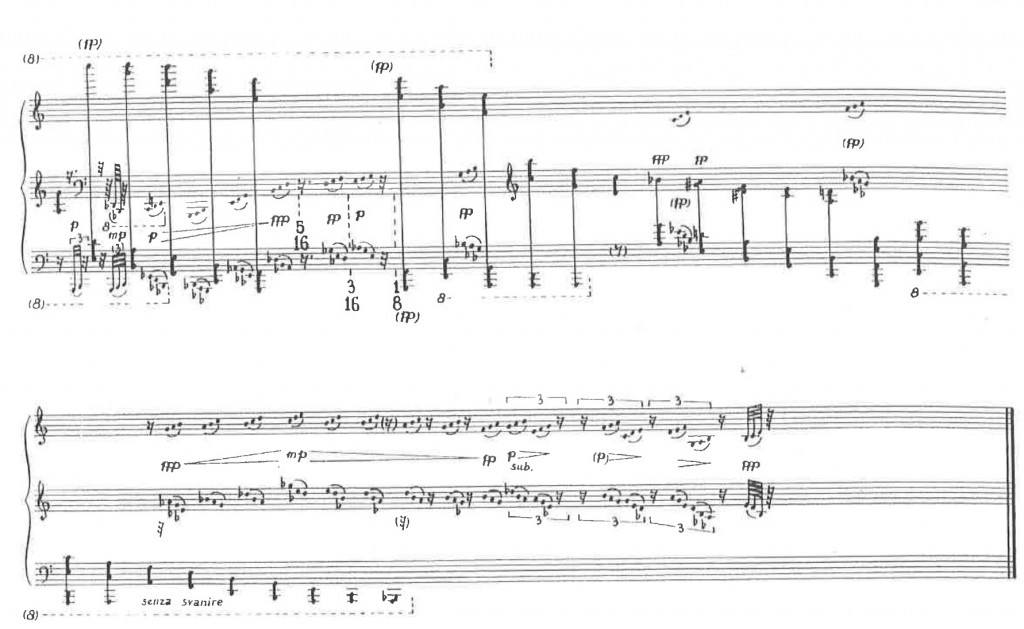 It’s an effective piece: it reminds me of Galina Ustvolskaya in its uncompromising lack of interest in ordinary temporal and dynamic variety.

In terms of performance: none of these sonatas are playable without serious commitment. It does not help that Ricordi has presented them in a trim size that makes the notes nearly microscopic. None of the images I am reproducing here is the whole page: the score is 13″ x 9″, with very small notes. That fact alone makes these sonatas among the most rebarbative piano scores of the last hundred years.