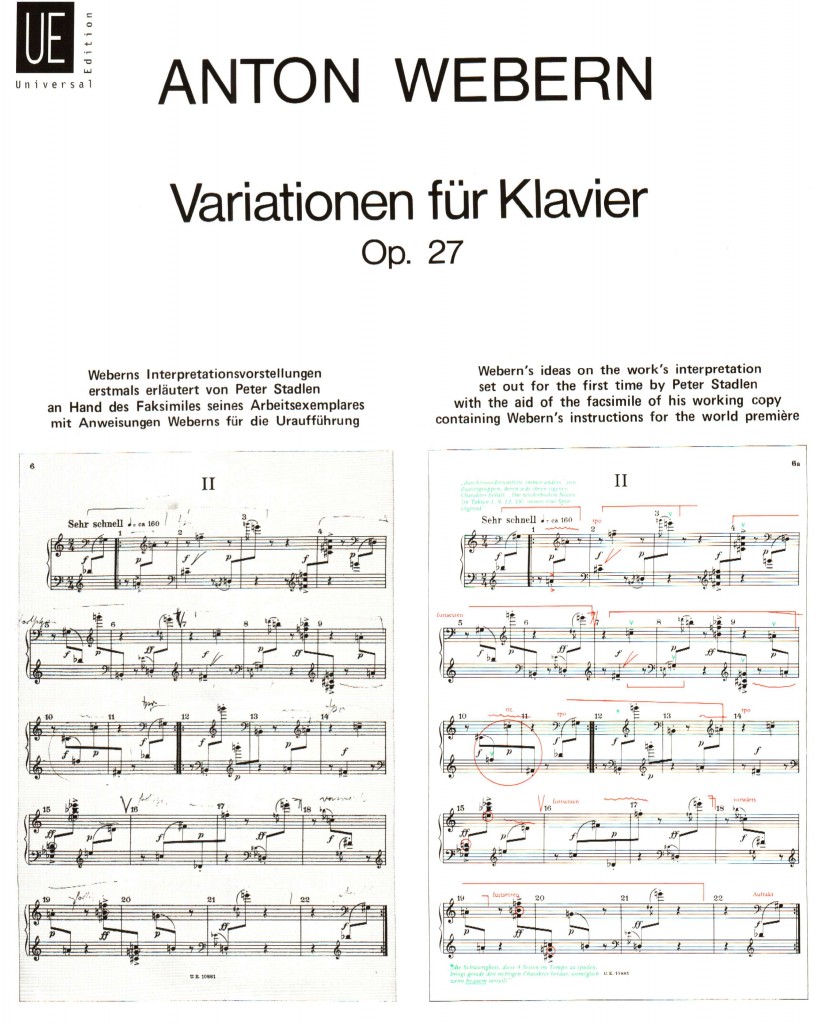 Webern’s piano variations are available in a very unusual form: in a facsimile of the first edition, with Webern’s own indications for performance. On each left-facing left page is the facsimile with pencil annotations made by Webern while he instructed the pianist Peter Stadlen. (Detail below.) On each right-facing page Webern’s lines, arrows, and other indications are printed in red, along with Stadlen’s memories of Webern’s instructions in green. In addition there is green text: Stadlen’s memories of what Webern said, and, in quotation marks, verbatim things he said. 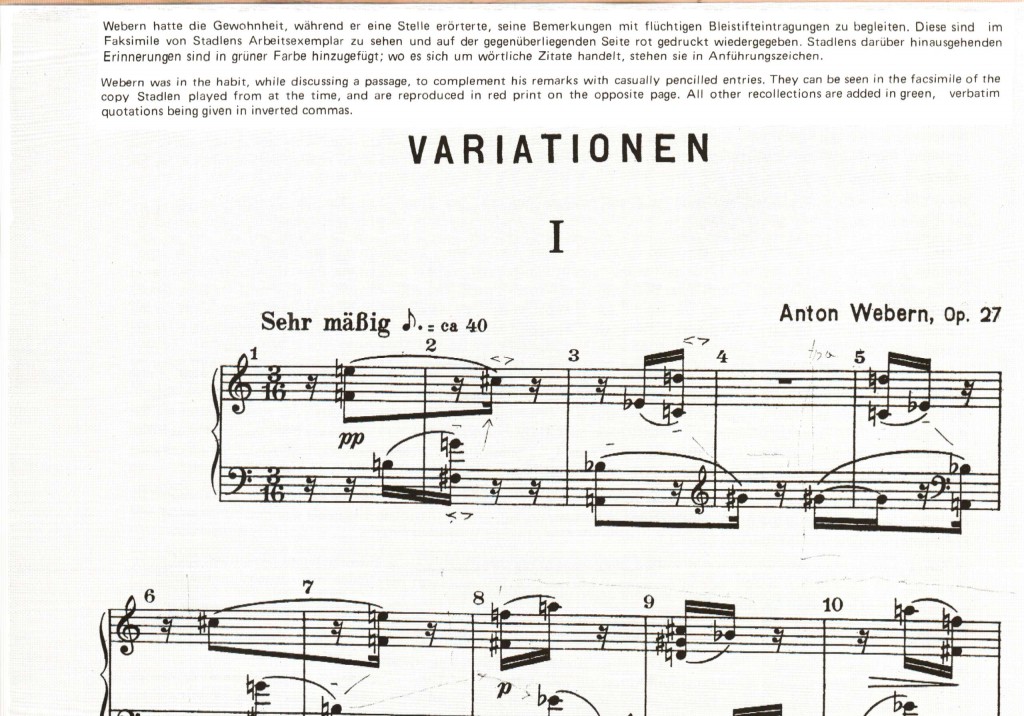 Stadlen wrote an introduction to this edition in 1979, in which he comments that Webern had a “fervently lyrical mind bent on expressiveness,” and that he was said to play with “enormous intensity and fanaticism.” This edition was greeted as a kind of revelation for those postwar composers and historians, Boulez among them, who felt that Webern’s music was intellectual and emotionally neutral or cold. (See Robert Wason’s article, available on JSTOR.) To the extent that Stadlen’s notes and memories can be applied to the rest of Webern’w mature music, suggesting a composer much more in line with his late romantic origins than with the postwar serialism that took him as its patron saint.

It may be apposite to revisit Stadlen’s edition now that another half-century has almost passed. Given the rise of effect theory, the new romanticism, spectral music, popular late-minimalism (as in Adams, etc.), it may be of interest to ask just how far toward Webern’s hyper-emotionalism we may want to go. (I suspect not very far, and for me that illuminates the conservative nature of current trends in postmodern neo-romanticism.)

First, it seems interesting that the emotionalism Stadlen identifies is entirely consonant with the passionate voice of Webern’s letters to Schönberg and others. He seems ecstatic, almost hysterical, in some letters, even though his subject is his dodecaphonic accomplishments—canons, inversions, and so forth. But those emotional registers were intended to be shown very differently in performance. Stadlen says Webern “refused” to talk about the technical aspects of the Variations, saying that what mattered is “how the piece ought to be played, not how it is made.” I wonder if it might be possible, however, to picture Webern’s passion for technical composition as being of a piece with the expressiveness of his music in performance.

How feverish, how sensitive, should a performance be? Should pianists try to emulate Webern’s “enormous intensity and fanaticism”? It helps to compare earlier compositions, like this song from a cycle of Stefan George poems, Op. 3. 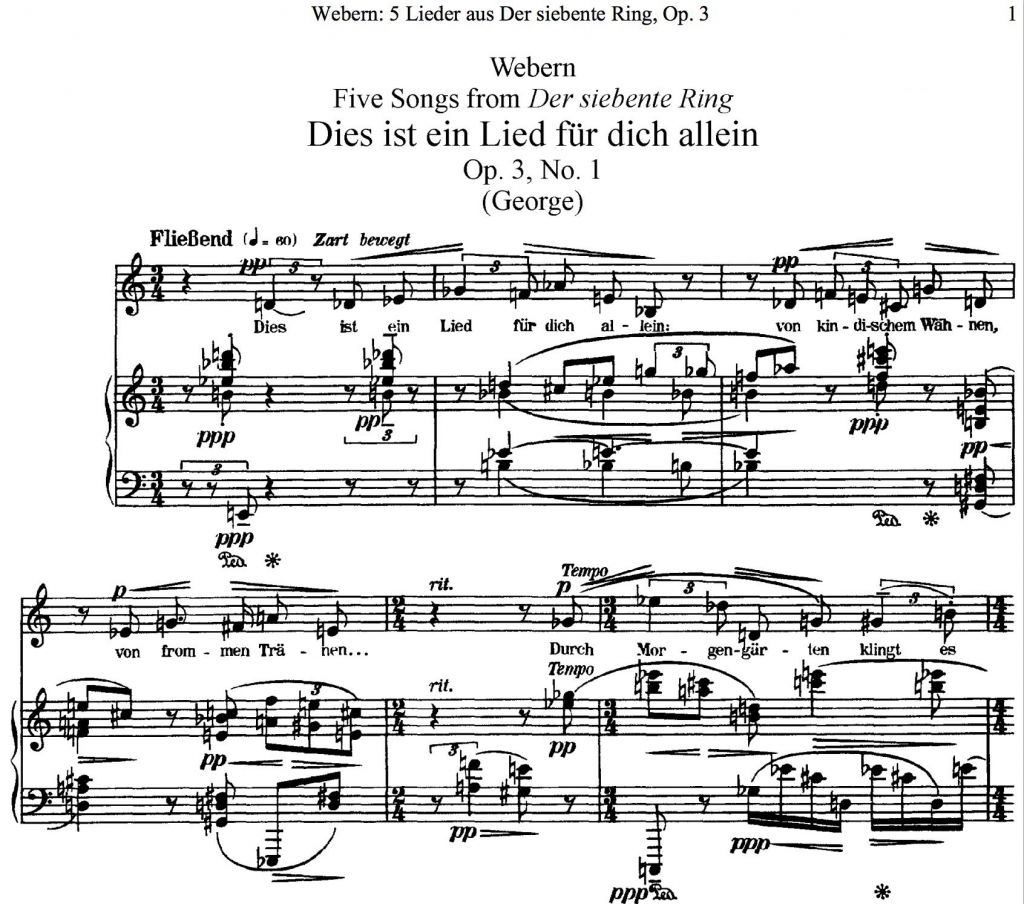 The words are themselves say almost nothing about their emotional content, as if it could barely be understood even by the one person to whom it is addressed. (Approximately: “This is a song for you alone: of childish thoughts, of pious tears… It sings through the gardens of morning on light wings. It is a song that might move only you.”) The melody turns from hopeful to pensive, from ecstatic to uncertain, several times during the course of the one-minute song. In measure 1, for example, the melody moves up, but in measure 2 it falls immediately back down, signaling doubt or reserve. There are barely perceptible fluttering sounds to accompany the song’s metaphorical wings, but they die out almost as soon as a listener becomes aware of them (measures 6-7, in the left hand). 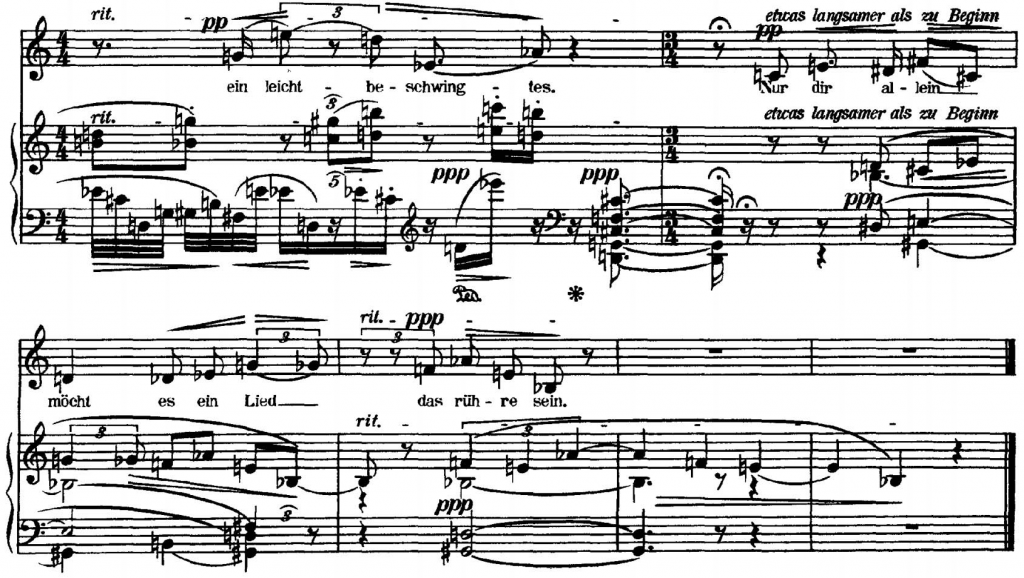 The last line of the poem—the last 5 measures—is prayerful but so tentative it pauses and ends as quietly in irresolution. Two measures later the piano echoes the singer’s E natural and B flat, and the song is over.

Even by the standards of Schönberg’s work at the time, this is delicate to the point of neurasthenia, and over-wrought to the point of hysteria. It wrings expressiveness from every note. I imagine a nearly continuous rubato of affect and tempo. It is the kind of attenuated, hyper-sensitive emotionalism that continues in different forms in his later work. The question, I think, is exactly how different. 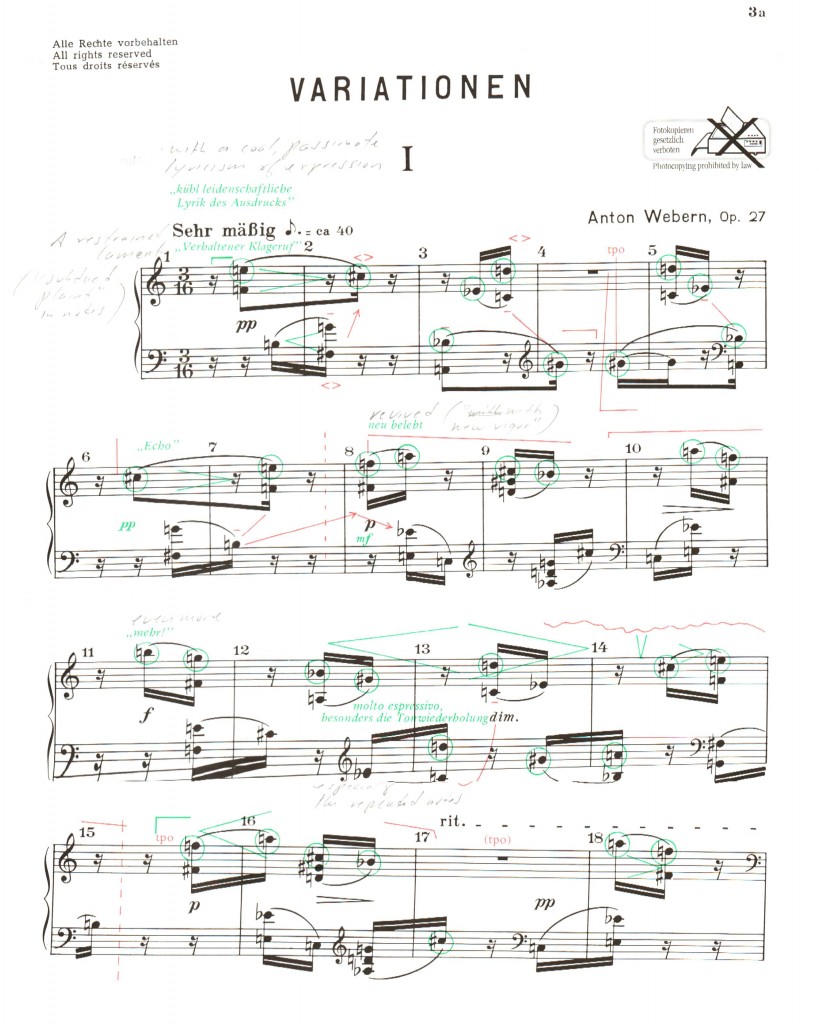 The opening of the piece is the most densely annotated. The piece begins with four repeated groups of four chords or notes, with a sixteenth-note rest between each. Its distant relatives are those pieces by Beethoven, Brahms, and others that open with repeated brief motifs, like Brahms’s Op. 118 no. 4. But here nothing is repeated, and the mood changes with each group of four. Stadlen’s annotations show that Webern imagined three groups of four, followed by an “echo.” After another sixteenth-note rest, there are 9 sixteenths before the next rest, and then 12 sixteenths before a rest. These can be heard as overlapping groups of four or as stretti comprised of groups of three. Either way Webern marked the first one “revived” or “with new vigor,” and the second one “even more.”

The question is how far to take these indications. I think it is possible to play the first group of four as a rise and fall, exactly as mercurial as the opening two measures of the Op. 3 song. Then the second and third groups of four would have different arcs, as if they were marked parlando.  The one Webern marked “echo” could be done pp, and crescendi could be emphasized in the following measures. The entire passage could be as carefully modulated as the opening modulating melody of Beethoven’s Op. 14 no. 1, measures 5 to 20—as if it were a sonata in miniature, with a full complement of moods. I imagine the effect of a perfectly communicated performance of the opening page of the Variations would be exhausting, because it would require an intensity of listening together with a capacity to take in mercurial changes of mood. 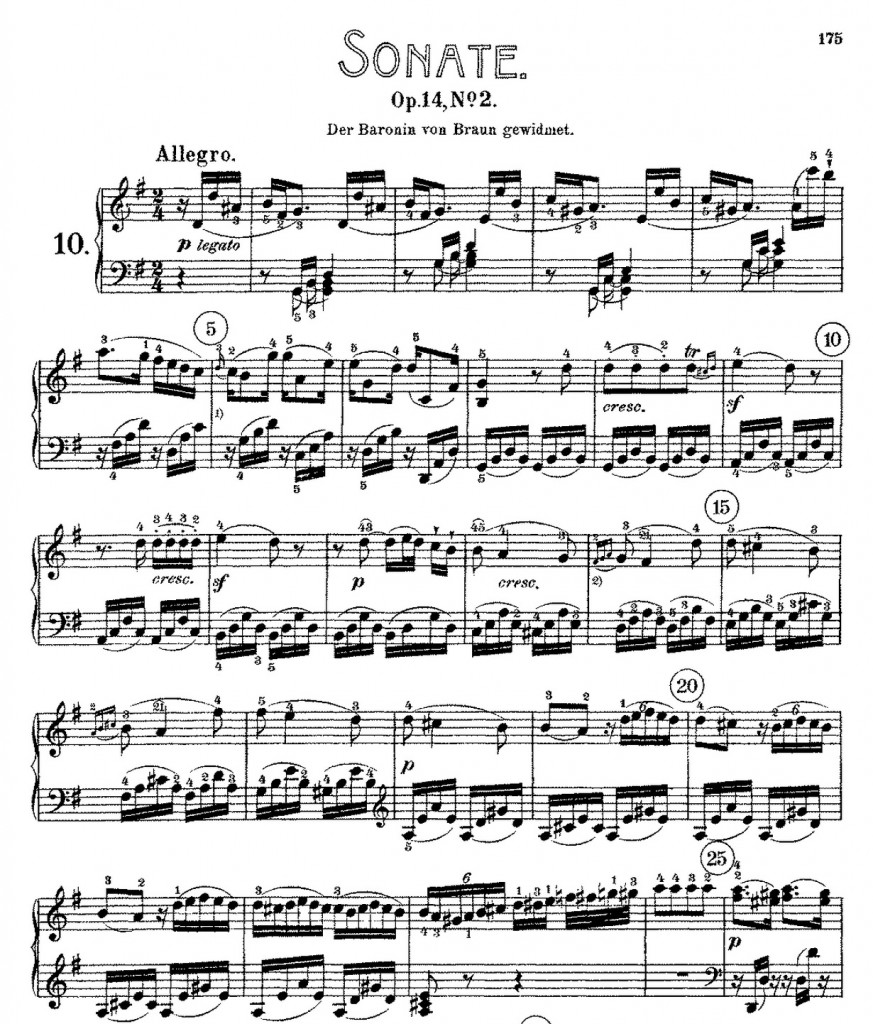 The opening of the third movement is also a good test case for the limits of molto espressivo or very intense playing. (See the score below.) It is not difficult to see how measure 7 can be “exalted,” because the two high E flats in the melody of the song Op. 3 no. 1 provide a model: a single high expressive note standing as a synecdoche for a more conventionally extended high passage, like the one in measures 5-7 of the Beethoven.

Webern’s word for the opening motif of the third movement is “elegisch” (“elegiac”). Here again it is possible to imagine a miniature lament comprised of only four notes, as in the last four notes of the poem in Op. 3 no. 1. 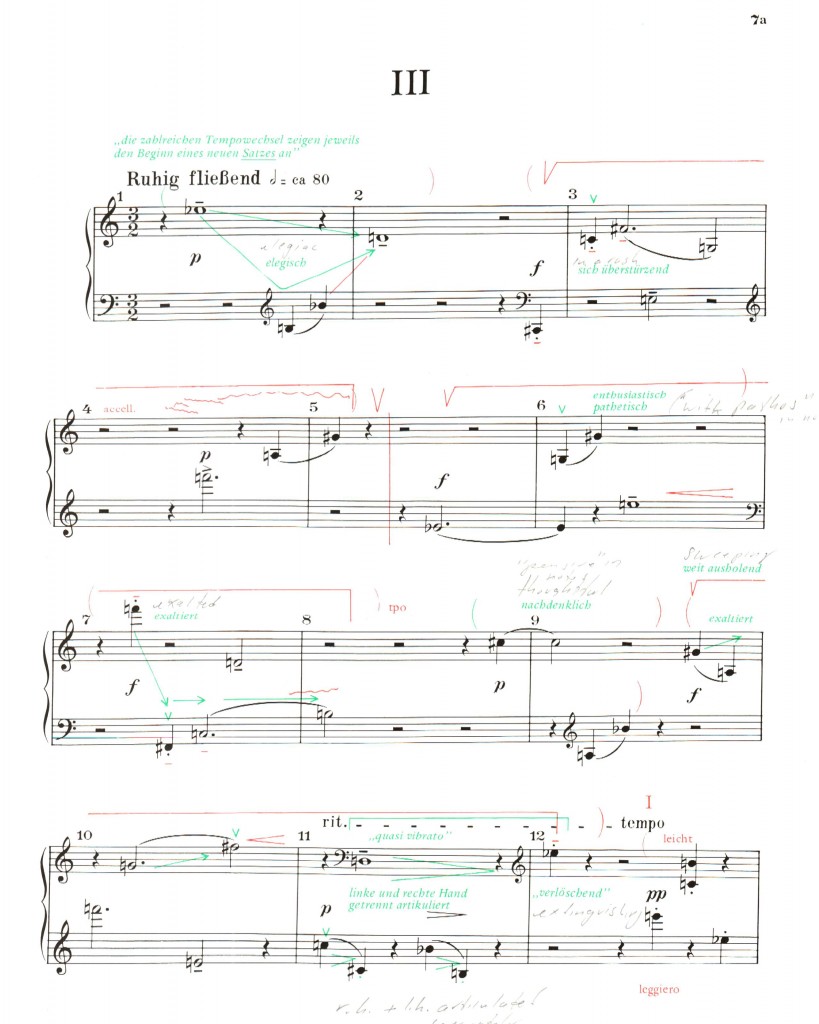 But there are limits to what can be heard. On the final page, Webern asks the performer to distinguish the right-hand voice from the left in measures 56 and 57: 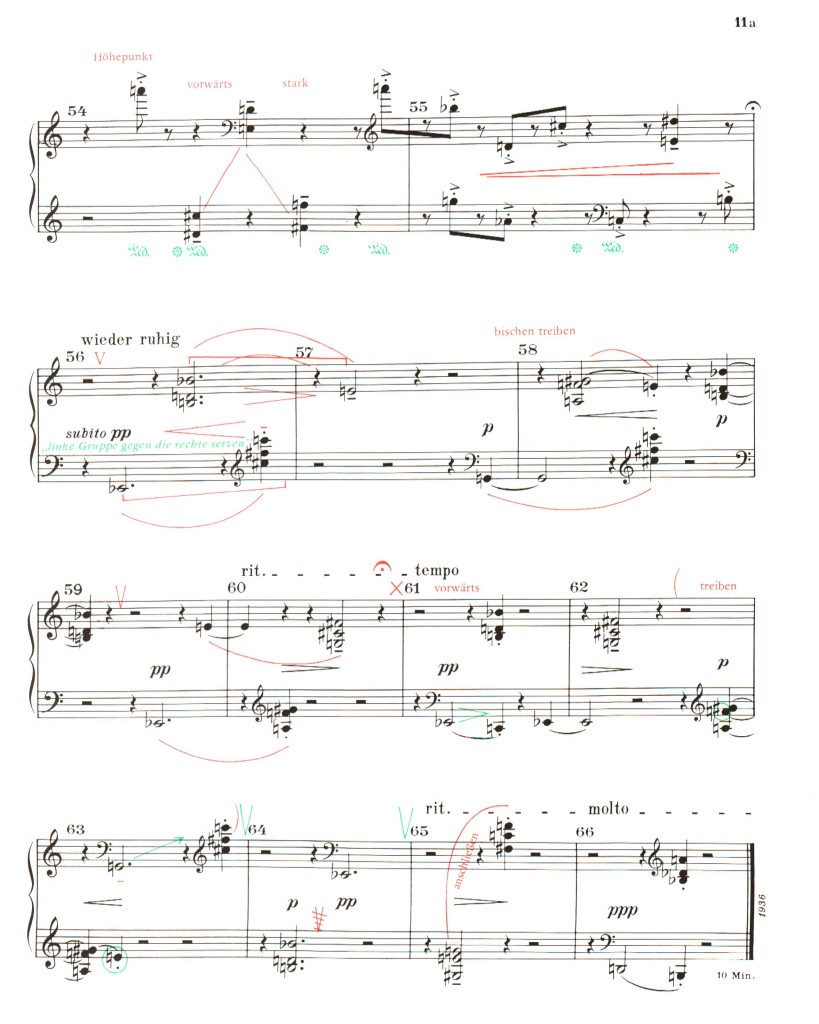 This is difficult, perhaps impossible, to make clear to a listener: the two voices cross and both have rests between their first and second chords. And yet Webern has marked the right-hand notes no less than four times—two slurs, a tie, and a decrescendo—and he has slurred and tied the left-hand notes and marked a crescendo! I imagine that it was attempts to articulate passages like this that made him seem intense or fanatical as a performer.

It seems to me a good idea, and an interesting challenge, to play pieces like the Variations as “fanatically” as possible, with the fullest range of extreme emotions, even if they can barely be heard through the leaps, dissonances,  and rests, and even if they follow one another so quickly they are barely comprehensible. I do not see a reason—either in Stadlen’s annotations or in the music itself—to limit performances to what can plausibly be heard. And there is certainly no historical warrant to playing in order to articulate the piece’s structure (canons, variations, etc.).

There is a magnificent performance by Glenn Gould  (to be distinguished from a less convincing one), in which he achieves a kind of supernatural articulation of individual notes, pairs, and groups of three and four—but I do not hear much of Webern’s emotionalism. Several other pianists play expressively, but they tend to be more uniformly sentimental than Webern apparently intended. (Webern is sentimental—that is part of fin-de-siècle late romanticism—but his sentimentality is evanescent.) Of the many performances, Pollini’s may be the best balanced: but balance is not, I think, the point.