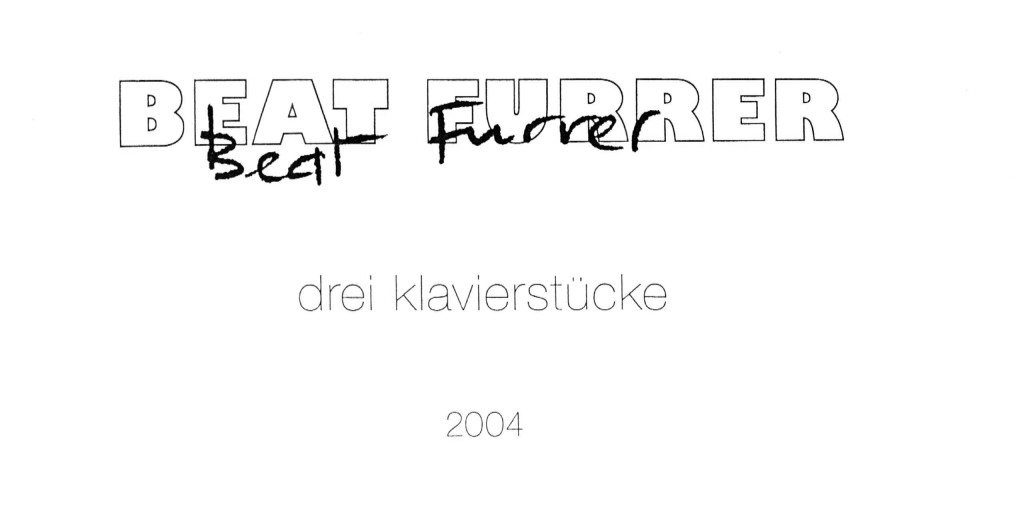 Beat Furrer (b. 1954) is a contemporary Austrian composer who writes carefully constructed, technically demanding pieces that are not in line with  recent styles a such as Post-minimalism, New Simplicity, Spectralism, High Texturalism, New Complexity, and so forth.

The IRCAM website has one of the few assessments of his work:

This corresponds with some of Furrer’s titles, but it is at best a schematic notion of the some of the metaphors he uses to think about the works. The detailed effect of Furrer’s works is an entirely different matter. I think what matters in his music is a tense unremitting control of self-imposed limits, and an accompanying vigilance regarding the danger, both psychologically and to the structure of the music, of letting those limits go. For me the work is a compelling answer to several tendencies in recent music precisely because it is so tightly bound by self-imposed constraints.

There are a number of pieces for solo piano. Some are short; here is Melodie (2003) in its entirety: 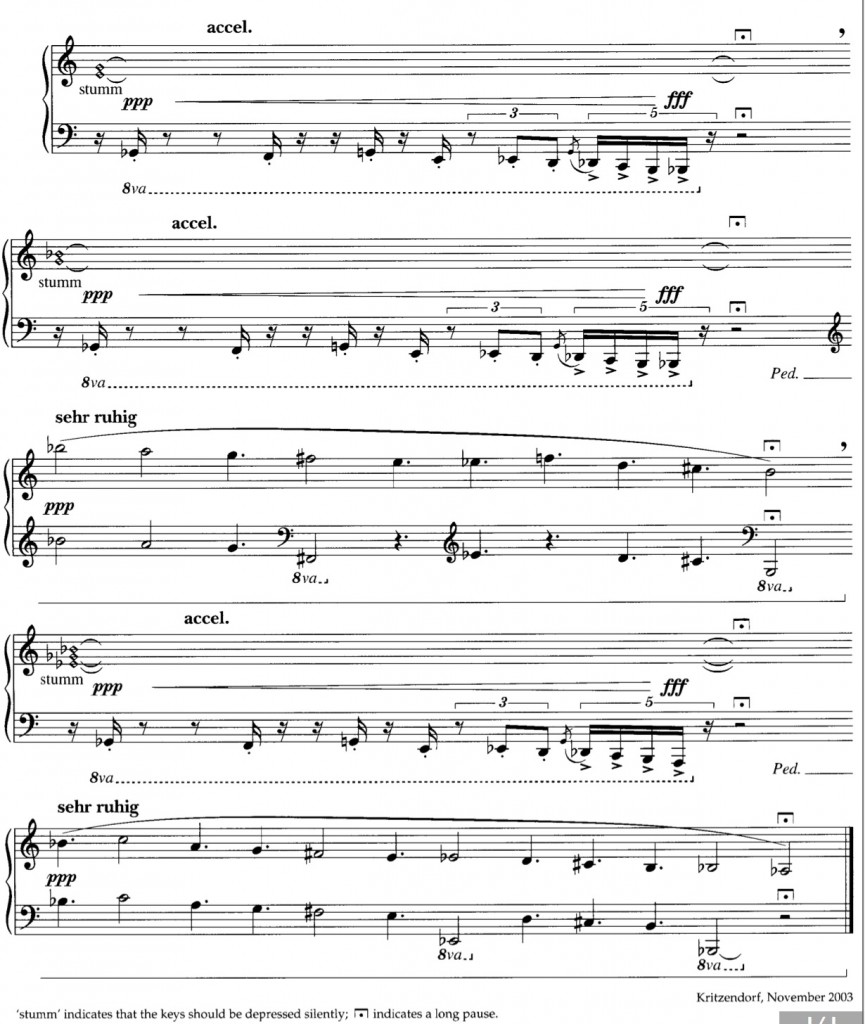 And here is the opening of Voicelessness: The Snow Has No Voice  (1987). The performer plays the first two staves, then the second and third, and so forth, so that either the left or right hand repeats what’s been heard before: 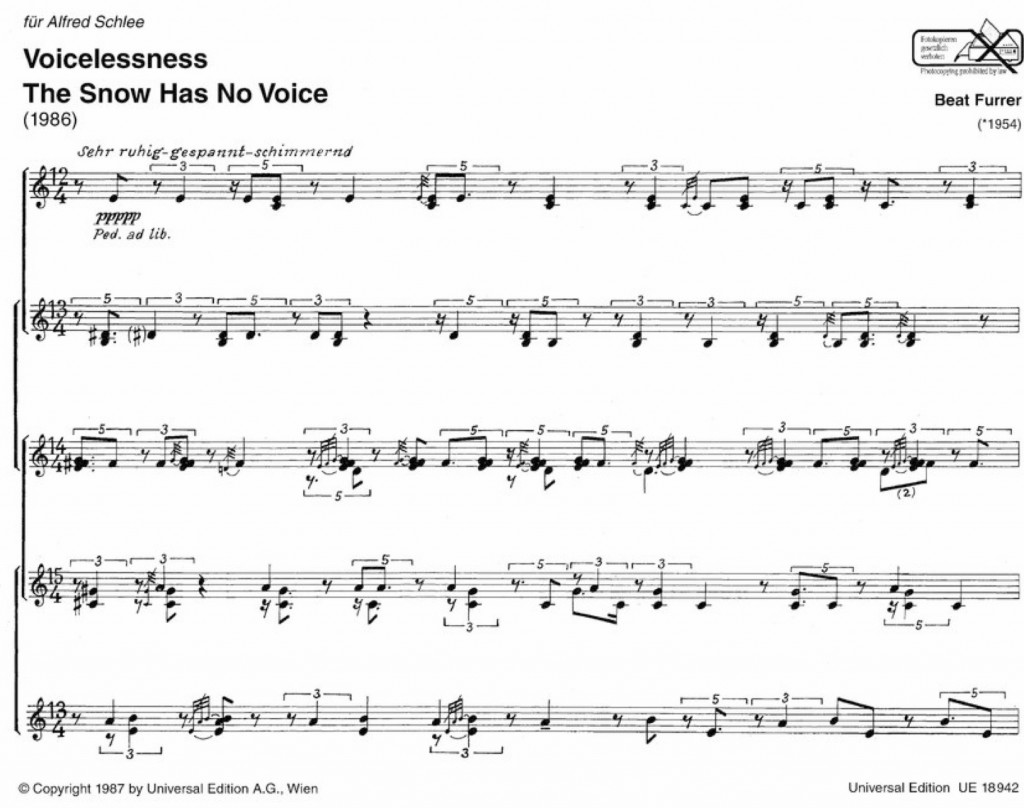 Phasma (2002) is a major piece, too difficult for me to play. It  can be heard along with the score on YouTube. The opening is comprised of ppp staccato forearm clusters of notes in an irregular rhythm:

These clusters are like muttering, so Furrer’s indication “sprechend” (“speaking”) is appropriate: but because these are clusters, they also conjure a group of speakers or performers “speaking” in perfect arhythmic synchronization: the effect is tense and uncanny.

This page shows one of Furrer’s signature textures: a staccato voice, interrupted by broken chords and single notes in a different rhythm. It also occurs, for example, in Studie für Klavier (2011).  (Incidentally, it is not clear to me why the clusters are groups of five, considering the 3/8 time is never audible, and the bar lines are only a convenience: why not notate it in 5/8?)

The piece I am considering here, Drei Klavierstücke (2004), begins with a version of that same texture. This time the notes are in groups of three and five. I find it necessary to make penciled tick marks for eighth note beats; it would be possible use a metronome or click track for the same purpose. 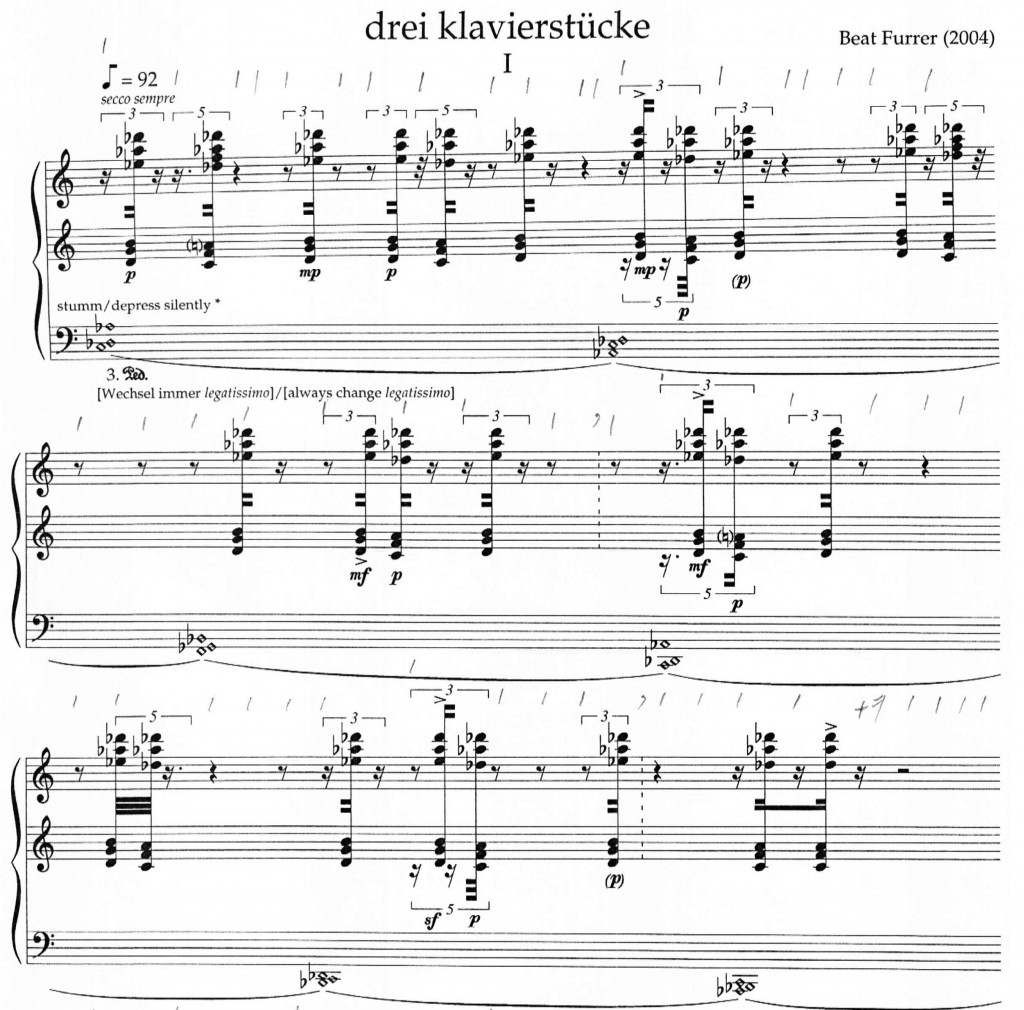 Initially there is no counterpoint except for the shifting quiet overtones produced by the silently depressed notes in the bass. The first contrasting notes are two long sustained c#’s on page 4. They are only single pp notes, but in this “muttering” context of staccato clusters, they sound as loud and full as bells. 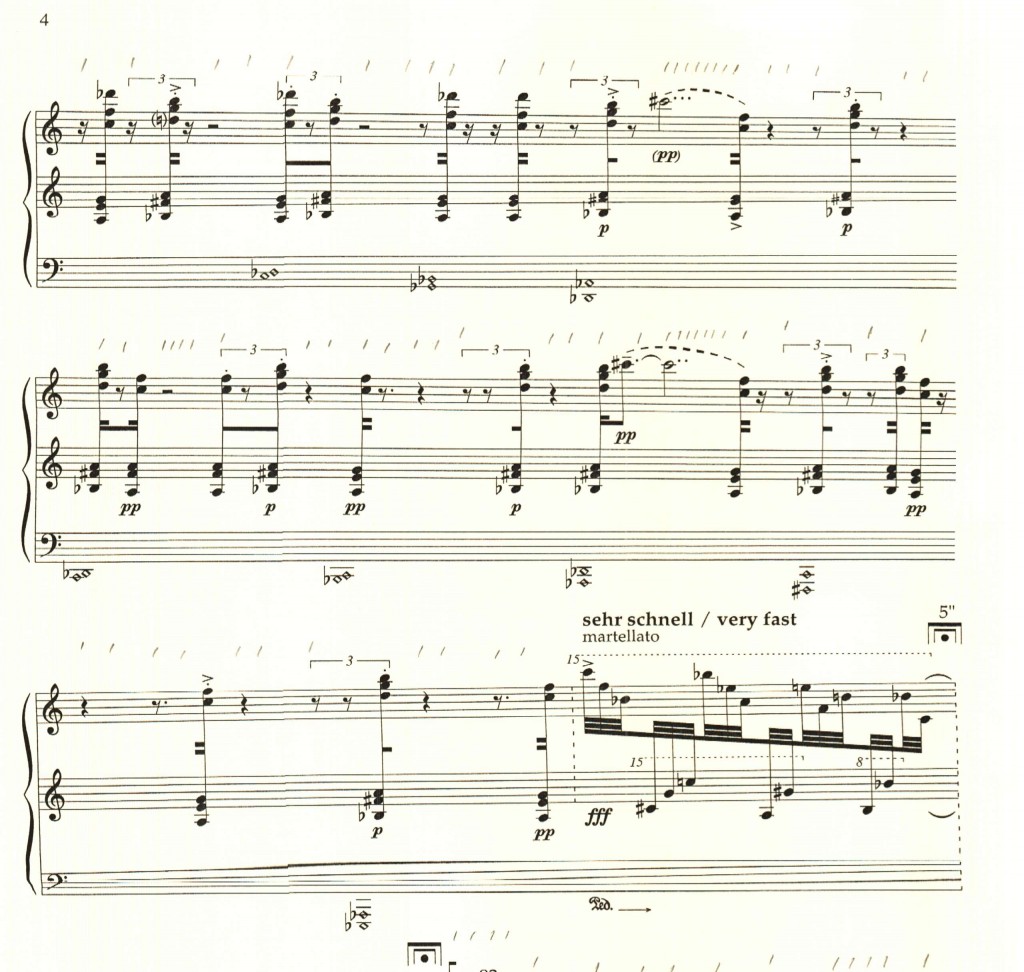 At the end of this scan is another of Furrer’s characteristic textures—rapid running notes and arpeggios. I call these “textures” because they tend to be sharply differentiated from one another, with no segues.

The second of the Drei Klavierstücke is very short. Here it is in its entirety. (Sorry, one scan is grayscale and the other is color.) 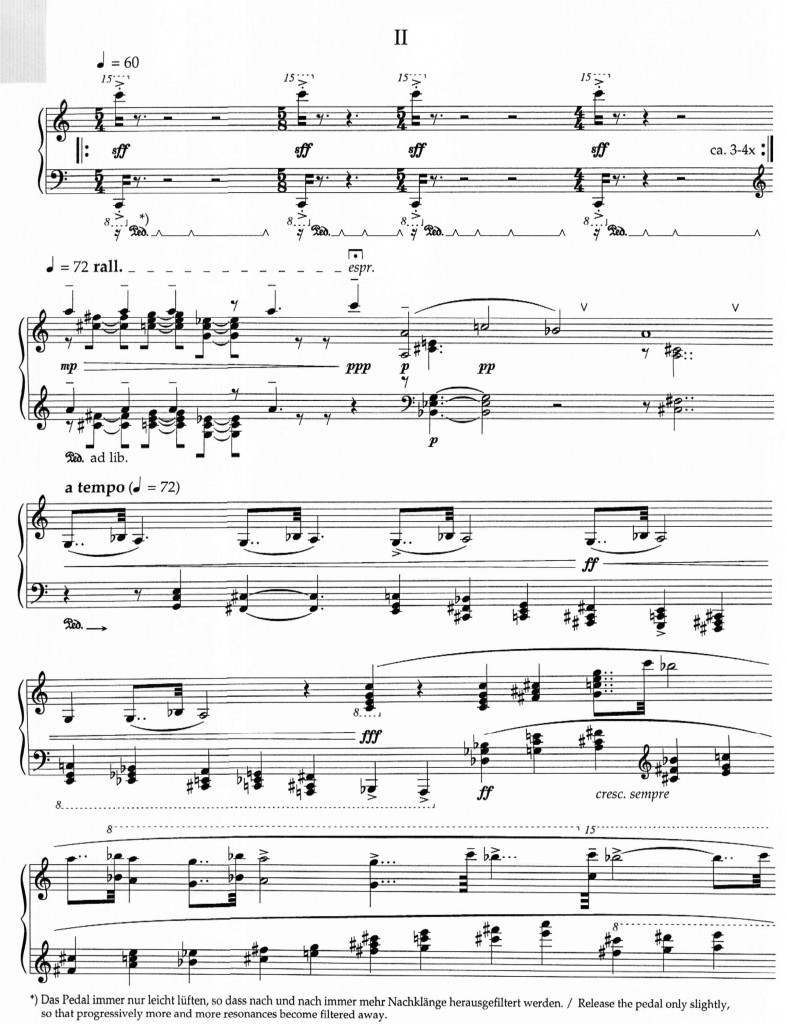 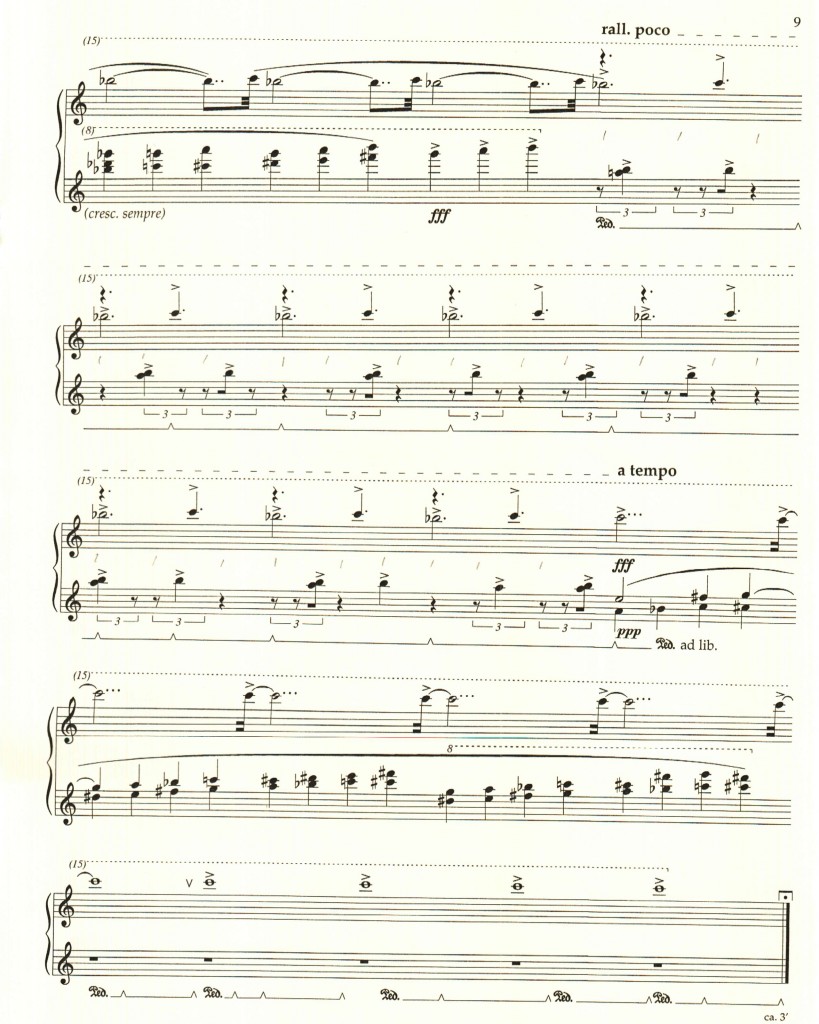 The first measure continues the spare staccato manner of the first piece. But then there’s an anomaly in Furrer’s music: a page that sounds like a quotation or fragment from a romantic piano piece. For me this is almost like a page of Rochberg, except that instead of being heartfelt it is emotionally uncontrolled and, I think, sarcastic or bitter. On the second page the dotted rhythm evaporates into a version of the same martellato texture as at the beginning—single and double notes up at the very top of the keyboard. The evaporation is analogous to what happens in Melodie (see the scan, above), except that here the fragment of romantic music goes out of control upward rather than downward.

It’s as if Furrer cannot control classical melodies: they burn up, they crash into the bass or fly up to the very end of the keyboard. What he controls is rhythms, textures, and timbres. He is very careful about nuances of timbre; some piano pieces have special instructions for producing unusual, but sensitively judged effects. It almost seems that he needs to work with a restricted range of tools, because otherwise the work would become suddenly wildly emotional.

The third Klavierstück has some running figures, and also a third texture: staccato repeated notes. Passages like this sound like minimalism, but somehow gone wrong: it’s obsessive-compulsive minimalism, too tense and tightly wound to modulate as in Reich or Glass. The repeated notes are repetitive and mechanical (these are marked “very regular!!”), and the scales and arpeggios are very fast, too high or low or blurred to hear properly. (In other pieces, such as Studie für Klavier, the running figures are chords and octaves, which can be just as hard to hear distinctly, and also much more difficult to play.) 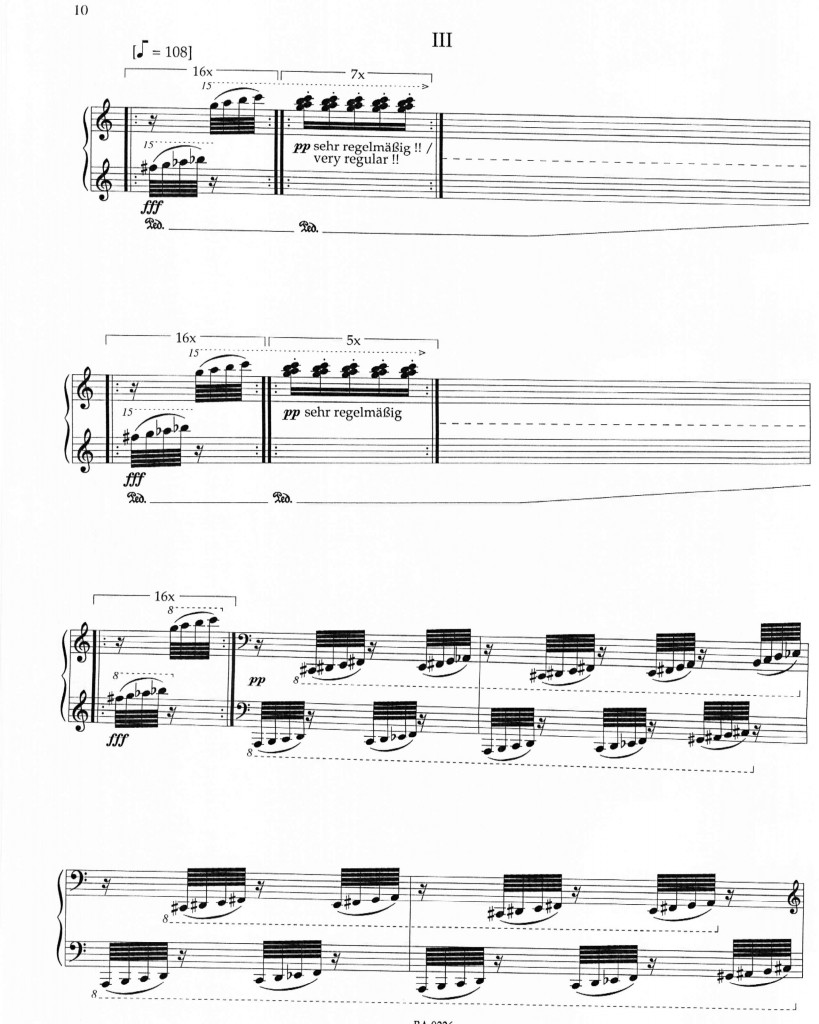 Those pages give way to a fourth texture that also occurs in other pieces (including Phasma), an open framework of rising figures: 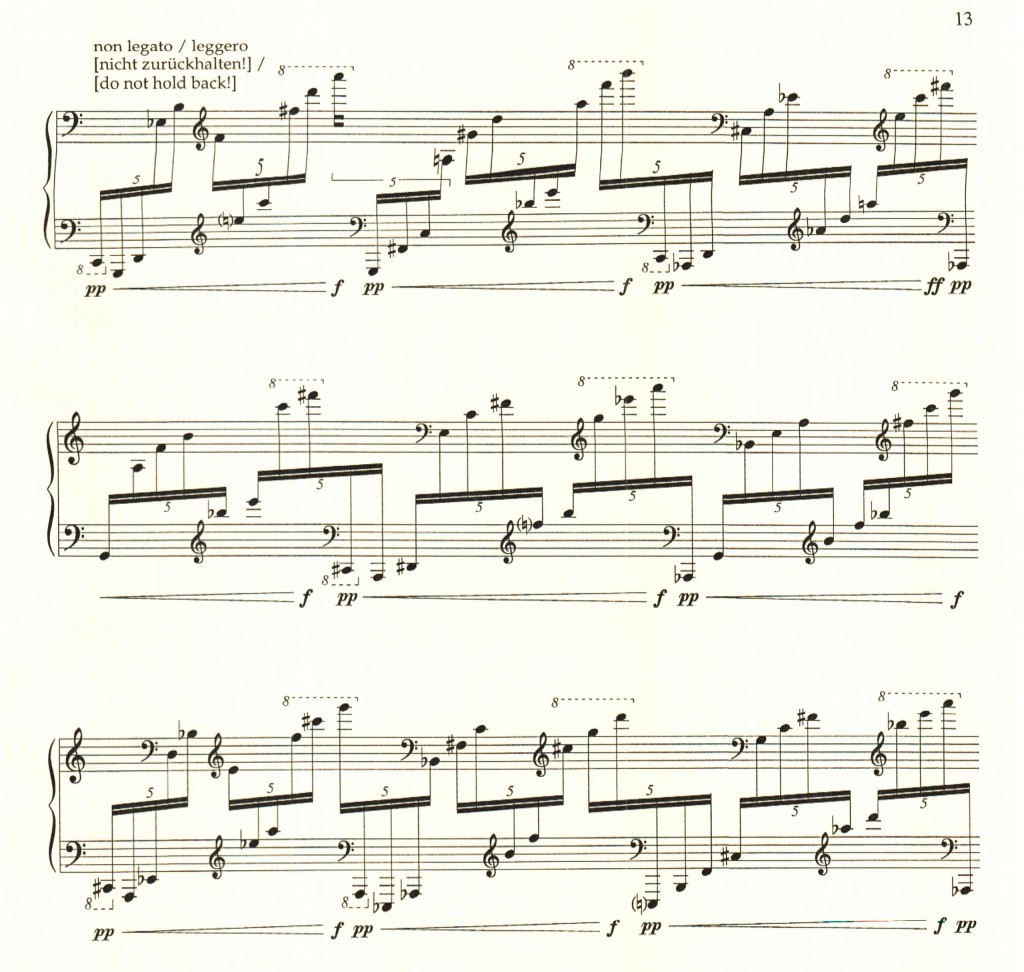 In Phasma figures like these are interrupted by isolated chords and notes. Here the interrupted chords come a page after these arpeggio-like figures, in a separate section: 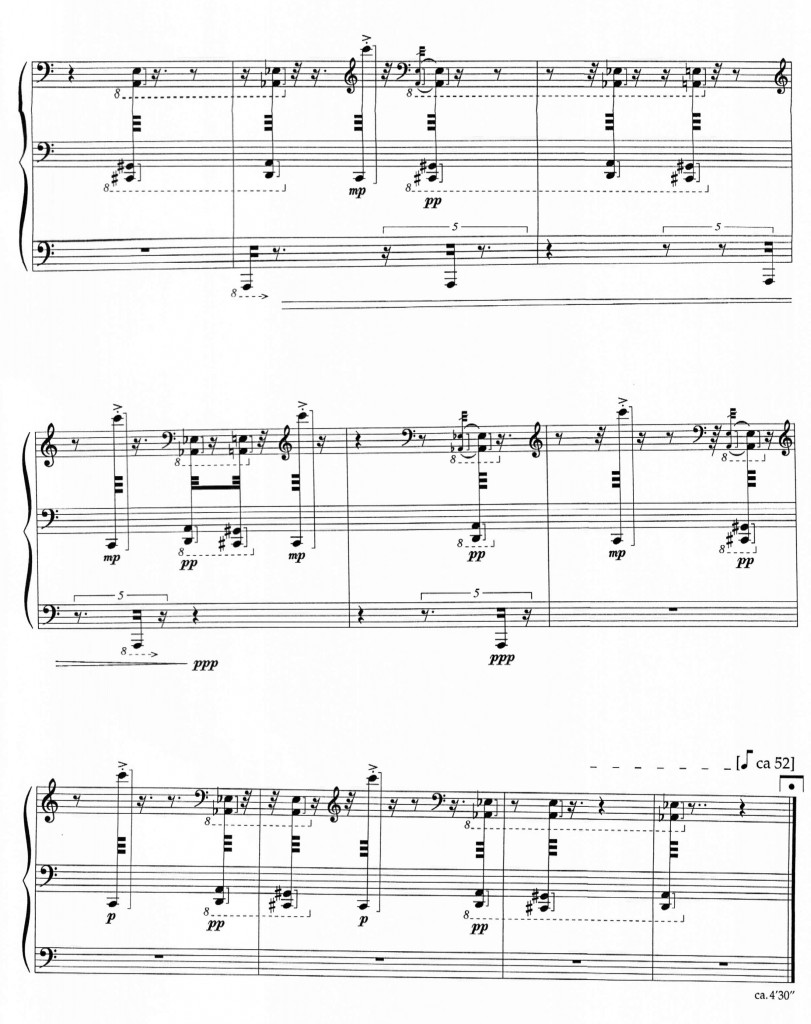 These juxtaposed, disjunct textures, many repeated in varied forms across several pieces, can produce a kind of nearly hysterical intensity. I find Furrer is at his best when he is working within one texture, or when one alternates with just one other. Pieces like Drei Klavierstücke that use four or five textures in succession can seem inadequately realized or provisional. In this case the weird romantic dotted figure in the second Klavierstück is so different from what comes before and after (even within the short second Klavierstück) that it becomes hard to hear the Drei Klavierstücke  as a coherent or deliberated whole.

What’s fascinating about Furrer, I think, is the tremendously intricate and complete control he forces on his carefully curated material. In the pieces where he permits himself to write more freely, as in the second Klavierstück, or in the ensemble piece Linea dell’orizzonte (2012), the music can seem to go suddenly out of control—very loud, very high or low, with inappropriately or unexpectedly grand rhetorical gestures like the dotted rhythms in the second Klavierstück, or else long fermata, or violent crescendi (as in Linea dell’orizzonte). Apparently wild passages are of course fully notated, but they suggest that the muttering or martellato or ppp or 15va or staccato arhythmic passages are the ones in which the music really speaks. This is exemplary music, some of the best being written.

In terms of performance: Drei Klavierstücke is playable, although the third piece is difficult. The shorter pieces I mentioned are easier. Unfortunately Studie and Phasma are very difficult in parts, but for a pianist more skilled than I am they would be excellent choices.